Vampire tales are cautionary tales.  The vampire represents desire, for sexual experimentation, power, violence, and chaos.  Vampire tales warn us of the dangers of these desires, and of their immense power.  Our rational minds are no defense against them.  Indeed, the best defense is God, whose mysterious power, resistant to rational understanding, is more powerful by far than those who escape the unconscious or defeat the grave.  Throw holy water on a vampire, or ward him off with a cross.  Kill him with a piece of wood, that fragile and humble element sanctified with Christ's sacrifice.

If we were ruled by our rational minds, we'd probably manage to deny our deepest yearnings more often.  But desire is what drives us.  Desire mingles with love and longing, giving birth to impulse, and hope.  Just one more look into a forbidden love's eyes, just one touch, just one kiss, just one consummation.  How can love be bad?  How can love be the instrument of suffering and death?

Modern vampire stories capture this paradox, and try with all their might to protect us.  They tell us of lovers, just like us, good and caring people, who submit.  Forbidden desires seize them just as they seize us, and in constantly fresh acts of hope, storied lovers act on them, just as we long to.  And when they do, the door is opened, and evil comes in.

Vampires are the cash cow du jour, since Stephenie Meyer's novel Twilight spent over 90 weeks on the New York Times Best Seller list, and sold over 17 million copies worldwide.  The 2008 film adaptation grossed nearly $400 million worldwide, and to date has earned nearly $160 million in North American DVD sales.  The next film in the series, New Moon, is scheduled for a November release.

Anne Rice deserves a great deal of credit for the current trend in vampire lore.  Her influential Interview with the Vampire introduced millions to the idea of the handsome and seductive vampire.  While this was not a new idea, in Rice's hands the popular image of the vampire transformed from the hideous monster of Nosferatu to the romantic and tormented figure we've come to expect.  Rice's vampires dominated the 1970s and 1980s.  Joss Whedon's Buffy the Vampire Slayer ruled was the cornerstone of upstart network The WB's 1990s prime time lineup.  HBO's True Blood, just concluding its second season, is the network's most popular original drama since The Sopranos.

If Twilight sales figures remain robust, media interest in vampire romance will remain high.  And so The CW television network (formerly The WB) decided to launch another vampire series, debuting The Vampire Diaries on September 10.  Preliminary Nielsen data indicates that the show set a ratings record for a Thursday on The CW (although it lagged far behind NBC's coverage of the NFL's first game of the 2009 season). 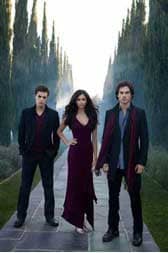 Adapted from L. J. Smith's books of the same name, The Vampire Diaries casts the vampire as the new high school hottie.  Stefan (Paul Wesley) has returned to Mystic Falls, Virginia and enrolled in Mystic Falls High School in order to be near the lovely Elena (Nina Dobrev).  Recently orphaned, Elena longs for her parents, longs for an end to sadness, and knows, in a surprisingly realistic fashion, that the community has moved on, and she must too.  Elena also looks just like the woman Stefan loved back in 1864.

Stefan is gentle and protective, but his brother Damon?  Not so much.  Played by Ian Somerhalder (Lost), Damon is awesomely sexy, dangerous, and entirely without a conscience.  While not precisely the basis for a love triangle, the table is set for plenty of teen angst and developing awareness of just how fraught with danger this life can be.  Not all souls get out alive.  Some of them, like Stefan, are undead.

But there's a little more to this story, an extra element that distinguishes The Vampire Diaries from The CW's other lushly-colored and slickly-produced teen dramas.  The alienation, loss, and longing that we've come to expect from vampire tales and teen dramas alike are enhanced by an added feature: the show's promising exploration of memory and continuity.  The titular diaries are vehicles for exploring of the boundaries between life and death, memory and experience.  The vampire Stefan has been keeping diaries for at least a century and a half, and Elena is keeping hers, too.  Sometimes, eerily, the two of them write the same things, sincere expressions of sadness laced with hope for the return of something good and consoling.

This desire, for something on the other side of pain and tragedy and the aching loneliness of coming of age, is one of the most human of all.  It's not a dark desire.  It hardly implies mayhem and chaos.  But the vampire myth is an unforgiving one.  Following our deepest desires comes with a price.  We open the door to suffering and evil, and, well, more vampires.