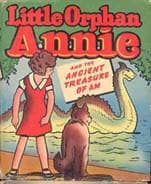 We are fascinated by stories of orphans, especially when those orphans suffer and still succeed.  Our literature shelves are brimming with them.  Witness Charles Dickens' David Copperfield, Oliver Twist, and Pip, a young gentleman of Great Expectations.  Charlotte Bronte, an orphan, introduced Jane Eyre.  James Whitcomb Riley inspired over a century of comics, radio, theater, and film with this:

Little Orphan Annie's come to our house to stay,
An' wash the cups an' saucers up, an brush the crumbs away,
An' shoo the chickens off the porch, an' dust the hearth, an' sweep,
An' make the fire, an' bake the bread, an' earn her board-an' keep...

The further ranks of super-orphans illustrated and illustrious include Batman, Iron Man, Spiderman, Superman, Storm, and Wolverine.  Book sales for another redheaded orphan who insisted her name be spelled "Anne" with an "e" surpassed 50 million by 2008.  But even Anne of Green Gables is outdone nearly ten to one in total sales by the most successful fiction publishing venture of all time, chronicling the coming of age of the orphan "boy who lived."  In fact, Daniel Radcliffe had played two orphans -- David Copperfield for the BBC and Harry Potter for movie audiences everywhere -- by the time he was twelve.

My father died in an accident when I was thirteen.  I remember my mother promoting an article she had read that ostensibly demonstrated a higher rate of career success and satisfaction among those who lost a parent at an early age.  Perhaps grief and adversity have their advantages.

But there is another side to "success."  In "The One-Hundred Billion Dollar Man: The Annual Public Costs of Father Absence," sociologists Steven Nock and Chris Einolf summarize research on children with deceased or absent fathers:

What makes the difference between an orphan's "success" and failure?  Is it individual temperament, coping skills, poverty, or support networks?  Most memorable for me were simple human relationships and acts of generosity: loved ones with listening ears and advice when it was sought, a doctor who gave me his rollerblades, a friend whose family let me use their weightlifting equipment, a neighbor who cheerfully "chauffeured" me and my sister to school, church chums sharing fun and ministry through service projects, ski trips, and choir retreats.

These friends and Good Samaritans did not all emphasize my fatherlessness, though some did.  Too much focus was embarrassing or even painful.  I was once introduced to a new youth pastor with the mortifying words: "Meet Ben, his father died recently!"

I did not necessarily expect other people, even family members, to fill my father's shoes.  One awkward adolescent moment occurred when a well-intentioned relative attempted to initiate in my father's stead a frank and frankly unwelcome talk about sexuality.  I assured her that I could talk with others about such issues, and asked her please not to bring up the subject again.

Even so, I did ache for "surrogate" fathers during my teens and more intensely in my twenties.  Amity with professors grew to some degree from these desires, and struggles with how to deal with the opposite sex ensued partly because I didn't have a father to counsel me, or even to set an example, on how to relate with women.  In seminary, when I once expressed my lack of confidence in mentoring younger folk, especially any future children I might sire, a friend responded that we were a generation called often to mentor without being mentored, to father without being fathered, to lead without our own set of examples to follow.