The Hope of Muslim Women 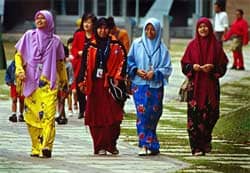 A review of the new movie, The Stoning of Soraya M, reminded me of a story I read in junior-high school. "The Lottery," by Shirley Jackson, described an American small town in which one person was selected by lottery each year to be stoned to death. The victim in the story was a young boy, and what I still remember decades later is the mob bloodlust that transformed him from a child whom the townspeople had known all their lives into an inhuman, impersonal object of aggression. Soraya's story doesn't seem so different; the real Soraya was apparently killed because of village men fabricating charges, fueling the mob mentality, and using religion to legitimize their crimes.

The video-captured death of Neda Agha-Soltani, also Iranian, also Muslim, struck me the same way. Her fiancé says she wasn't protesting, but returning from a music lesson, and that her murderers were armed but not in uniform. Is the chaos of gunfire on unarmed protesters so different from mob bloodlust, even when it's the result of government brutality? No wonder, given stories like Soraya's and Neda's, that people worldwide assume Islam is oppressive of women.

I grew up in California, a devout Muslim girl, encouraged (okay, nagged) by my family and community to study hard and become financially and socially independent. What is the difference between me and a Muslim woman elsewhere in the world?

Nothing. Nothing except opportunity and culture.

It's not religion that keeps women back. It's poverty; it's war-torn chaos like that in Sudan and Somalia; it's high illiteracy like that in Pakistan; it's tribal customs like that in Afghanistan; it's authoritarian regimes like Iran's and Egypt's; and it's misogynistic culture like that in Saudi Arabia. Most often, in developing countries like Muslim countries, it's a combination of these.

Take Soraya's stoning, for example. Over half the Wikipedia entry for stoning discusses it (in a very muddled manner) in the context of Islam; yet, the punishment for adultery in the Qur'an is not stoning, it's flogging.

Stoning crept into Islam separately, in the books of religious interpretation written by early Islamic scholars over a thousand years ago. How did it get there? Not clear. But since Muslims believe that the Qur'an is the word of God, they should be looking to the Qur'an instead of to man-made 8th-century books of religious law.

But whatever the penalty for adultery in Islam, it is restricted so thoroughly - even under medieval religious law - that it is impossible to apply. For one thing, the penalty applies equally to both men and women, and to convict either one for adultery, you must first bring four eyewitnesses to the act of intercourse itself.

Let me just say that again: you must prove that four eyewitnesses saw the act of intercourse itself.

I don't know how many of you are lawyers out there, but I am, and I myself wouldn't want this kind of a burden of proof. Especially because the four eyewitnesses must have actually seen the actual penetration.

In addition to the four eyewitness, you must also prove that each eyewitness is trustworthy. And, if - by some cosmic convergence - you can bring these trustworthy eyewitnesses, the accused person can still invoke numerous defenses, such as fraud, duress, mistake, or lack of capacity (mental or physical).

In short, this is an impossible burden of proof.

Yet, witness the so-called Muslim countries that shamefully allow it or ignore it. It's heart-rending that a religion that meant to raise the status of women and limit violence should now be used to implement more violence.

Although Muslim groups are increasingly promoting women's rights and educating Muslims regarding Islamic law, we must do more. Perhaps that way, Muslims worldwide won't be so vulnerable to extremism promoted in the name of a religion that was originally, believe it or not, a feminist one.

This article was first printed in the Huffington Post and is reprinted with permission.

Sumbul Ali-Karamali has a degree in Islamic law and is the author of The Muslim Next Door: the Qur'an, the Media, and that Veil Thing (White Cloud Press, 2008).