The World as Created, Fallen, and Redeemed 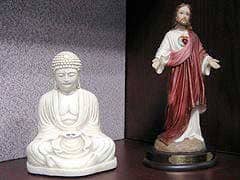 Back in the summer of 1995, three other Benedictines and I had the opportunity to spend five weeks in Tibet and North India, mainly to visit Buddhist sites and engage in dialogue with Tibetan monks and nuns. I well remember how on one occasion at a monastery in India I had just begun a brief presentation on some basic Christian doctrines when, as soon as I mentioned our belief in a creator God, many of the Tibetan monks in the audience started giggling. They certainly didn't intend to be offensive, but the very idea of a creator of the universe seemed to them so preposterous that they inevitably found it humorous.

I am actually grateful for their response, for it prevents me from blithely assuming that Buddhists and Christians are merely saying the same thing in different words. Indeed, some Buddhist authors, both classical and modern, have written severe critiques of the doctrine of a Creator God. Whether or not there is a possibility of bridging the gap between our two traditions on this point -- as has been suggested in one book (Buddhism, Christianity, and the Question of Creation: Karmic or Divine, 2006) -- is something that we could discuss. I'll broach one way of possibly building such a bridge, but first I want to discuss as briefly and accurately as possible what the Christian doctrine is.

In order to give a particularly clear example of what Christians mean by creation as brought about and preserved in being by God, let me present another anecdote, this one from the life of one of the most prominent Catholic theologians of the past fifty years. By the time Avery Dulles graduated from a New England prep school in the spring of 1936 he was a thoroughgoing materialist, holding that every notion of God was merely an invention of the human mind to explain things that could otherwise not be accounted for. He entered Harvard College that fall, still ensconced in what he called a "cold, amoral world ... governed only by chance and by the selfish actions of human persons engaged in the cruel quest for pleasure." Then, early in the spring semester of his sophomore year, his whole world was suddenly and unexpectedly turned upside down. Here is how he later described what happened:

...I was in Widener Library poring over a chapter of [Augustine's City of God] which had been assigned as reading in one of my courses in medieval history. On an impulse I closed the book; I was irresistibly prompted to go out into the open air. It was a bleak rainy day, rather warm for the time of year. The slush of melting snow formed a deep mud along the banks of the River Charles, which I followed down toward Boston.... As I wandered aimlessly, something impelled me to look contemplatively at a young tree. On its frail, supple branches were young buds attending eagerly the spring which was at hand. While my eye rested on them the thought came to me suddenly, with all the strength and novelty of a revelation, that these little buds in their innocence and meekness followed a rule, a law of which I as yet knew nothing. How could it be, I asked, that this delicate tree sprang up and developed and that all the enormous complexity of its cellular operations combined together to make it grow erectly and bring forth leaves and blossoms? The answer, the trite answer of the schools, was new to me: that its actions were ordered to an end by the only power capable of adapting means to ends -- intelligence -- and that the very fact that this intelligence worked toward an end implied purposiveness -- in other words, a will.... Mind, then, not matter, was at the origin of all things. Or rather not so much the "mind" of [the Greek philosopher] Anaxagoras as a Person of Whom I had had no previous intuition. ...

Nor were the operations of this Person confined to flowers and foliage. The harmonious motions of the stars, the distribution of the elements, and the obedience of matter to fixed laws were manifestations of the same will and plan. Looking, then, into myself, I beheld energies coursing through the human person, the greater part of them beyond the realm of consciousness, tending constantly to preserve, to nourish, and to restore the weary body and soul. These forces were not of our own making ... yet they had from their inception a legitimacy which was conferred upon them by Another -- the same as Him Who moved the stars and made the lilacs bloom...

... As I turned home that evening, the darkness closing round, I was conscious that I had discovered something which would introduce me to a new life, set off by a sharp hiatus from the past.