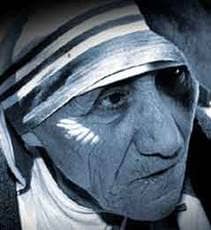 The Catholic League recently penned an ad for Variety in which the group implores CBS/Showtime to cancel Penn & Teller's show on the basis of "...malicious assaults, especially on Mother Teresa."

That phrase struck me as particularly interesting -- "especially on Mother Teresa."  She was known to go into war zones to rescue children and famously accepted monies for her charity work from, among others, a convicted criminal (Charles Keating) and a despotic leader and his family (former Haitian leader Jean Claude Duvalier). Having gone through all that, what then could Penn & Teller do to her?  Criminals and war zones can't hurt her but two entertainers -- one of whom doesn't even speak -- with a show on cable can?

I admit I'm being somewhat facetious but my root question is:  why do we feel the need to zealously defend saints (or in Mother Teresa's case those who are beatified) from questioning or whitewash some of their more interesting human flaws?  This is not a modern invention and has been an issue for sometime.  As Dorothy Day, a founder of the Catholic Worker movement, famously said, "Don't call me a saint.  I don't want to be dismissed so easily." (Ironically, Dorothy Day is currently being considered for sainthood.)

I have a healthy respect for saints and so my questioning isn't to knock them down but rather to point out that if someone is a saint, then surely they've already endured more in their life that we could (or at times, depending upon the saint's life, would want to imagine).   To go through life, with all of its challenges and struggles, and not only maintain your faith but to have your faith be an inspiration for those around you and then for all time I believe is testament enough.  By excessively removing the saints' shortcomings or zealously defending their honor when it has been perceived to be attacked, only diminishes the inspiration that one can gain.  We need our saints to retain their humanity - we already have God who is perfect.  We need to know, and believe, that there are those who are like us - imperfect and yet close to God.  If we feel the need to remove what made them unique, what then are we left with?  The answer is nothing then but false idols.