A Collection of Comics

That said, I am sure that we will be looking for further funding and sponsorships in the not-too-distant future. But, certainly, the Humanities Foundation has given it a wonderful start. 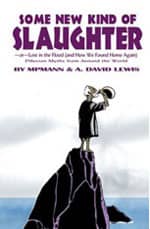 What pieces have you acquired so far?  Do you have a list of "most important" to "least important"?

The "completist" in me gets a strange pleasure out of seeing the full run of a series on the shelves. So, the entirety of Preacher is there, all of Promethea, all of Buddha, and so forth. For this first stage, the goal wasn't getting "hard to find" pieces, per se, or first editions; it was to stock up on a wealth of titles from various viewpoints and of wide origins. While the collection features the full run-to-date of the wickedly irreverent Battle Pope, it also is stocking quite genuine works like Samson: Judge of Israel, The 99, or Megillat Esther. And, while there's no "most important" or "least important," there's also no "high brow" or "low brow." Superheroes treating the issue of religion, say, in Kingdom Come are right next to Marjane Satrapi and the Iranian Revolution in Persepolis.

What obstacles have you faced in acquisitions?  Are there pieces that are hard to find, or that are not in terribly good condition?

Wonderfully, there's been no opposition by BU or the School of Theology Library. In fact, Head Librarian Jack Ammerman wrote a letter of support to the Humanities Foundation to make this possible, and the work of people on site like Olga Potap, James Skypeck, and Stacey Ramos have made it smooth sailing. But, yes, the difficulty of locating requested works is sometimes a problem; for instance, determining which version of The Manga Bible is available can be a thorny issue as can buying the correct edition of something that was produced and reproduced by multiple publishers. However, thanks in large part to the people I just mentioned, a number of these early obstacles have been overcome. I imagine (and somewhat hope) that future waves of acquisitions will prove more difficult -- suggesting that there will be future waves!

What are your favorite treasures in the collection?

I'm thrilled that Crumb's Illustrated Genesis is coming hot off the press and into the library rather than having to languish until it "cools down" or something. As I mentioned, I had previously donated a few books to the smaller collection, so it's nice to visit a few of my "babies": From Hell, Fantastic Four: Hereafter, the last two volumes of Cerebus. I'm probably most pleased by the scholarly texts that have also been acquired to accompany the creative works; there's Greg Garnett's Holy Superheroes! and Karline McLain's India's Immortal Comic Books, for instance.

(And, yeah, there are copies of The Lone and Level Sands and Some New Kind of Slaughter (http://archaia.com) there. But I donated them, I swear! ...Still warms my heart to see them there, regardless.)

Is the collection available to scholars?  Has anyone used it so far?

Yes, the collection will be available to scholars shortly and is already accessible to those on campus. The Library is still in the process of cataloguing it all, but they will also be providing a special mini-site for the collection online. I'm pretty sure a student or two of mine has already checked some of it out, and the library itself has set up a really nice display by its Reading Room to encourage casual readers to try some of the volumes.

What do you think will be the long-term importance of the collection?

I like to think that it will grow, with or without me, and create a sort of "gravity" to it. That is, as it takes up shelf space or appears in scholar's conference presentations, I am hoping it will compel more and more people to investigate it. Separately, I also think, just as the MSU collection was for me, it could become an invaluable resource to new, emerging scholars eagerly seeking texts and, well, just a home for their minds. Is that too humble or too grandiose a goal? I can't tell.

The Boston University Humanities Foundation was established in 1981 following the award of a $1 million National Endowment for the Humanities Challenge Grant to the College of Arts and Sciences and the Graduate School.

Their mission is to promote and enhance the work of humanities scholars at Boston University. Learn more about the Foundation at http://bu.edu/hf.