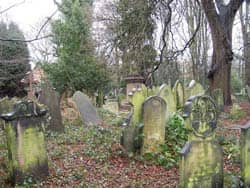 So you're dead and now you're hanging out on a cloud with some angels up in heaven. You check out Earth and notice Catholics commemorating the feast days of St. Francis, St. Teresa, St. Polycarp, St. Notburga, et. al., but what about you? You're keeping the same company, but you're not feeling the same love from down below. Not to worry, my heavenly friend, because you have a feast day too: November 1, All Saints' Day. And your friends and family who haven't attained the Beatific Vision just yet also get remembered the very next day, November 2, on All Souls' Day.

All Saints celebrates, well, all the saints, which includes both those that have been canonized by the Church and those known only to God. (For info on what makes a saint, check out Catholics Do This #8.) Not wanting to accidentally overlook anyone, the ancient Greeks included the Unknown God in their pantheon. Here we get a saintly version of that instinct: all the canonized saints have feast days, but All Saints covers the ones we don't know about as well.

Early on, Christians commemorated their martyrs, and eventually this grew into a celebration of all the saints, martyrs and otherwise. Churches in different areas celebrated on different days, with the first Sunday after Pentecost or the set date of May 13 being the most popular. Neither of those is anywhere close to November, and how the date got switched is a bit confusing. We do know that the English Church was celebrating a feast of All Saints on November 1 by the mid-8th century, with the Roman Church on board a century later, and the rest of Christian Europe eventually joining suit.

Here's a funny thing about All Souls: it doesn't actually celebrate all souls, just the ones of those who may not have reached heaven yet but who are definitely on their way (including those who've got a layover in Purgatory before they reach their final destination). So the unrepentant psycho killer or the person responsible for inflicting "It's A Small World" on us (you're singing it in your head now, aren't you?) aren't so much getting celebrated since they don't fall in that category of "the faithful dead."

We've got a definite starting point for the celebration of All Souls: in 1048, an abbot by the name of Odilo, who ran the Benedictine abbey of Cluny and all its affiliate houses, issued a decree that all the affiliates would join the mother house in observing November 2 as the day of remembering all the faithful departed. Over the next 300 years the custom spread all over Christian Europe, eventually ending up on the Roman (read: official) calendar in the 14th century.

Many other Christian Churches celebrate one or both of these feast days. Eastern Christians still celebrate All Saints' Day on the first Sunday after Pentecost and a have a bunch of days devoted to All Souls throughout the year -- the non-sainted souls might need those extra prayers to help them out, after all. In many Protestant traditions the two celebrations have merged and usually are celebrated on the first Sunday of November, often combined with a remembrance of those who have died in the previous year.

Lots of feast days have fallen off the calendar over the centuries, but All Saints and All Souls have staying power. They commemorate loss and the common experience of death but also proclaim the community of those still living with those who have gone before. In this way they are celebrations of hope for a future together in the presence of God. Just think, one day you may find yourself looking down from your cloud and see Catholics celebrating your feast day, even if they don't know your name.

Cynthia Stewart, a regular contributor to Patheos, has taught courses in the history of Christian thought, theology, philosophy, and medieval studies. She is the author of The Catholic Church: A Brief Popular History (St. Mary's Press, 2008).