An Anchor and a Purpose

An Interview with Stephen McCain, by Timothy Dalrymple

Editor's Note: We are hosting a conversation on faith and sports, in which we hear from people of all faiths -- including those, as in this case, who find spiritual inspiration in many faiths at once. 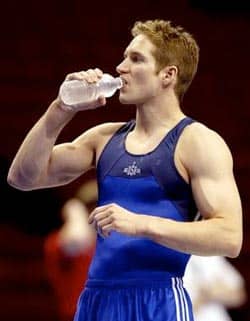 McCain grew up in Houston, Texas, in a Southern Baptist family.  It was not long after he began gymnastics at the age of 10 that his training and his devotion to the sport consumed his life.  When he departed for UCLA, he began "challenging everything" he had been taught to believe.  Although he values the faith of his family, and in some ways wishes he had "a more organized faith," he began to find spiritual life in many different faiths and in spiritual disciplines such as yoga.  Like many of his peers, he says, he seeks a "more organic" and "open-ended" faith that brings together the best of different religions.

He spoke with Timothy Dalrymple.

Prior to the 2000 Olympics, what sort of effect do you think your life as a gymnast had on your spiritual life?

A significant effect.  Gymnastics was such a significant part of my life.  It effected everything.  When I was younger,  all the way up until I left for college, I went to bed every single night praying to God about what I wanted to do as an athlete.  In college, things changed.  Maybe some of it was the atmosphere in Los Angeles, and maybe some of it was the deep need I felt to question everything I had been taught.  But I can tell you one thing for sure: when I missed the 1996 Olympics, I was angry with God.  I felt like I had done everything right.  Now I look back at it, and I was just devastated at the time, but it turned out to be the greatest thing that ever happened to me.  Now I'm actually thankful it happened.

But gymnastics had a profound effect.  Sometimes, with gymnastics, you get a really profound feeling when you are in such amazing control of your body.  You achieve these heightened states of awareness.  I delved so much into who I was as a person, physically and mentally and spiritually, that I felt like I perceive God to be in everything.  God is all of us, a universal energy.  And I'm certain I developed this spiritual philosophy just because I have really delved deeply into my personal physical body.

You told me that Yoga had a profound effect on you.  You turned to Yoga in order to find self-mastery, but you also found something spiritual there.

After I missed the 1996 Olympics, I had to assess why I had fallen short and what I could do differently.  In competitions, I had a hard time keeping a calm nature.  I had so much expectation.  I was so prepared, but I was still anxious.  So I started yoga, and yoga became a kind of moving meditation for me.  Yoga was developed so that people could meditate for longer periods of time.  It's an ancient practice, and when I really started pursuing it, I felt more collected and present than I had ever felt before in my life.  That was a religious feeling for me.  Some yoga is made only for fitness, but it was designed to have a spiritual side as well.

I really enjoyed that; I had found something that made me feel spiritual again.  I took workshops in it.  I even did a four-day silent retreat in Colorado, where we did yoga every day, hiked, meditated, and on the last day we did something called kriya, which was a six-hour intense meditation with very heavy (holotropic) breathing.  It's a natural way of entering into a very intense meditation.  You purge all of your ego and personality, and get down to the core of who you are.  It was the first time in my life that I had ever felt my physical essence, my life force.  It was seriously, seriously intense.

When you have an experience like that, it shapes your perception of what you want to be like spiritually.  My mother is a devout Christian, and we've always enjoyed challenging one another.

She would tell you that she's seen the change in me, and that I'm one of those people who will not take things at face value.  I've got to figure things out for myself.  If someday I have an experience that brought me in line with Christianity, then I would be Christian again.

You say that not making the Olympics in 1996 was the best thing that happened to you.  Can you explain that?  How did it effect our character?