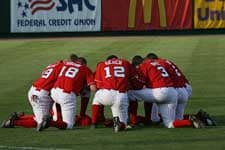 In many locker rooms around the country, whether high school, college, or even professional, teams take a collective knee and pray before taking the field of competition. Some institutions, such as the University of Georgia, even have a designated team chaplain to pray with and provide spiritual guidance for players.

The presence of prayer in sports has grown particularly strong in football, America's most physical and violent sport. Football has long been described in terms of an epic 'battle' or conflict; players don uniforms and protective gear and face their adversaries across defined battle lines. "It's very much like warriors going into battle, a platoon going into battle," said Grant Teaff, the executive director of the American Football Coaches Association.

Religious themes that may have traditionally been associated with warfare seem to have found a place in football, a socially acceptable outlet for the expression of aggression and violence albeit in a controlled and rule-dominated setting. And while the theories exploring the rise of prayer in sports/football deserve a much more in-depth study, for individual athletes and teams prayer and spirituality in general can play a significant role as coping tools in such a high-stakes atmosphere.

Prayer and (more generally) spirituality have been known to be positive contributors to mental health and well-being. One important distinction made in the literature is between spiritual 'well-being' (a much broader term implying a strong sense of relatedness or connectedness to others, belonging, and a belief in something greater than 'the self') versus 'religiousness' (conformity to particular outward practices/rites), with the former being associated more robustly with mental health-wellness.

In the assessment of patients in a mental health setting, practitioners are encouraged to explore a patient's religious/spiritual background as it can provide many important supportive/beneficial themes in recovery. Their influence is thought to be multifactorial; psychological, social, and biological benefits have been documented. From a social standpoint, environmental influences such as healthy behaviors, group connectedness, and social support are important factors.

Perhaps most importantly, the psychological aspect of spirituality "may provide a mental model for guiding appraisal of life events and are important in self-regulation of thinking processes." This may help to provide a sense of meaning, perceived control, and predictability, particularly in times of high stress; overall, this can help to reframe trials as a "spiritual opportunities." Biologically, attenuation of the stress response is thought to mediate possible benefits in neurohormonal, immunologic, and cardiovascular functioning.

One would assume that in sports, especially as the stakes increase at the collegiate and professional levels, spiritual well-being may also provide some of these benefits as athletes struggle with expectations, injuries, bitter disappointments/losses, and other emotionally charged scenarios.

In an article published in the Journal of Sport Behavior (see reference below), researchers set out to explore this hypothesis by studying 142 NCAA Division I athletes at a mid-sized university in the Pacific Northwest. The athletes were drawn from diverse sports including football, basketball, and others. Through a number of different rating scales (e.g., the Spiritual Well-Being Scale, Athletic Coping Skills Inventory, etc.) they discovered that many inner aspects of athletic competition, including coping with adversity, freedom from worry, goal setting/mental preparation, and confidence/achievement motivation were more robust in the 'high spiritual well-being' group.

As the authors note, these are often the qualities that are embodied in the frequently used 'mental toughness' descriptor. These findings are suggestive that certain aspects of spirituality in athletes may add to the array of coping mechanisms they have to deal with adversity, as well as to serve as a 'buffer' against stress. Of course, one may wonder if this necessarily translates into improved performance on the field, which is a question left unanswered at this time.

There are potential confounders and biases present in the study as well, and one should be careful not to attribute causality at this time; the nature and direction of these relationships are often difficult to tease out. This study also highlights some of the difficulties encountered when studying aspects such as spirituality, for it is difficult to randomly 'assign' spiritual exercises and beliefs to a treatment group vs. placebo group and assess for effects.

Nonetheless, the conclusions of the study are generally in agreement with previously published findings of the benefits of spirituality. At the end of the day, prayer and general spiritual well-being do appear to offer additional coping mechanisms for adverse situations and help to contribute to stress reduction, all of which can add to the 'mental toughness' aspect of athletes.