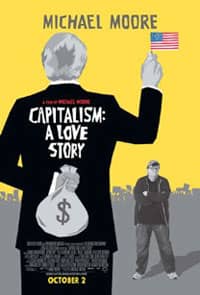 Michael Moore's latest documentary is a funny, heart-wrenching, and inspiring look at the current state of the American economy.  In a time of recession, foreclosures, and bailouts, it's hard to love free enterprise.  In a country in which the top one percent of the population has amassed more wealth than the bottom ninety-five percent combined, and two-thirds of all personal bankruptcies result from the cost of healthcare, it's really hard to love free enterprise.

But it's easy to love the people that Moore introduces us to in the course of his film.  We ache for the family that lost their mother to asthma.  She was only in her twenties when she died, and her children still weep for her.  She was an associate at Wal-Mart, a company that at the time took out so-called "dead peasant" insurance (http://deadpeasantinsurance.com/) policies on their employees and received tax credits for their trouble.  We might wonder: if a company is going to profit from your death, why would it assist with access to healthcare that might keep you alive?

And indeed, the critique of capitalism in Moore's movie is a moral one.  He's not all that worried about analyzing the GDP, or chronicling the outsourcing of American manufacturing and the reasons for it.  He doesn't weigh the economic consequences of regulation and de-regulation, and doesn't aim to work out a solution to this long-standing debate.  Instead, he wants us to laugh while he pokes fun at the people and policies that ran us into the ground.  But he also wants us to see the human side of the American economy.

He is there when a family loses their farm.  They'd signed on for an adjustable rate mortgage, and lost the farm when the payments ballooned.  The sheriff appeared to evict them thirty days before the date on their original eviction notice, and they had to rush.  While the men loaded a truck and burned trash, Mom carefully took cuttings of the lilies she had planted at the side of her house.

Searing images such as this one are bolstered by what is perhaps the most surprising aspect of Moore's film: he presents a religious critique of capitalism.  He tells us about his childhood in Detroit, where his father, a union man, worked in the auto industry.  They lived the American Dream: a nice house, family vacations, and a new car every few years.  And he had a great education, learning from Roman Catholic priests and nuns who inspired his love and loyalty.  He tells us that he had thoughts of being a priest at one time, because the priests of his childhood marched in Selma, opposed the Vietnam War, and worked to help the poor.

Now he hears the sounds of a different kind of Christianity, one that champions the wealthy.  He shows us a clip of Phil Gramm calling Wall Street a "holy place," followed by similar laudatory comments from other politicians and pundits.  The rich claim Jesus for themselves, Moore observes.

He asks the audience if we think this is consistent with the Gospels.  In the Gospels, he says, we read that the last will be first and the first will be last.  We read that we will be judged by how we treat the least among us.  We read that it will be very, very hard for the rich to get into heaven.  It will be easier for a camel to pass through the eye of the needle.

Just to experiment, he takes scenes from Franco Zeffirelli's 1977 Jesus of Nazareth and dubs in fresh dialogue.  In one instance, disciples bring Jesus a sick man on a stretcher, and Jesus tells them to check his insurance.  The joke is very funny, but the experience is jarring.  Christians have long taught that no one is more precious to God than the poor, and Moore's satire here makes it blatantly obvious that no matter what else we might think of the current system, it can't be the one that God approves.

Moore interviews a couple of priests about this, ones who view capitalism as a particular kind of evil.  They call our attention to the lack of social justice and human dignity, which Moore vividly illustrates with an investigation into the airline industry's low pay (pilots on food stamps) and poor airplane safety standards (scrimping on safety improves the bottom line).  Father Peter Dougherty calls this "radical evil."  Bishop Thomas Crumbleton reminds Moore that capitalist propaganda has a remarkable ability to convince its victims that the system is compatible with God's law and the teachings of the Bible.  He warns of woe to the rich.