Editorial Note: As a part of our discussion on "The Life and Death of Faith on Campus," we are presenting a variety of stories of how faith changes amidst undergraduate or graduate study.  For a richer discussion, we include the testimonies of those who gained faith or lost it, who veered to the left or veered to the right, seeking understanding and growth together. 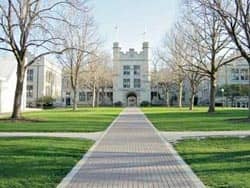 "We need to leave home in order to bring some conclusion to the formation of a separate self... And we also need to leave home so that we are free to go home again as adult individuals" (Herbert Anderson and Kenneth Mitchell, Leaving Home, p. 25).

I was raised in a very large Presbyterian church in southwestern Pennsylvania, and the upbringing -- call it baggage, call it a worldview, call it an ethos -- that came with that was rather formulaic.  My ancestors settled in this part of the country because they were Scots-Irish, and as such, settling in southwestern Pennsylvania was the thing to do.  Because of my ancestry, I am possessed of a perfectionist work ethic; a marked preoccupation with music, theology, and spirituality; and a kilt.

So the College of Wooster (which is in Ohio, not Massachusetts, and which does not rhyme with "rooster" -- make that mistake on campus at your peril!) was the obvious choice.  It was near enough to home, and it was founded by Presbyterians.  But although it still boasted a strong Scottish heritage (its marching band, of which I was a member, wearing kilts of the McLeod tartan), I found to my dismay that it had largely forgotten what it meant to be Presbyterian.

A smaller percentage of the student body was Presbyterian than I expected.  In fact, fewer of them were Christian than I would have liked.  Students believed strange things there.  Things like "if I don't make it to my 8 a.m. class, it's no big deal," and "homosexuals are not hell-bound sinners."  In fact, the way I was raised, the former was open to more debate than the latter, and I came to Wooster thinking that this was the default position of the rest of the world as well.

During my freshman year (sorry, first year -- I have to remember Wooster's nomenclature for the sake of its intrinsic sense of liberal feminism), I began to discern my personal call to ordained ministry.  I began to immerse myself in scripture, began to explore the process for becoming ordained, and began to seek out a body of believers with which to associate.  There was only one option on campus: the evangelical InterVarsity group, called the Wooster Christian Fellowship.

I attended a few meetings, and even persuaded my roommate to join me for a few.  But when worship began, with hands lifted high, personal testimonies, and praise songs I had never heard before being sung from memory, I felt disconnected.  I was not worshiping.  I was not praising.  I was confused, embarrassed, and frustrated.  Where was the organ?  Where was the hymnal?  Where was the proclamation of the Word?

I withdrew from participation with WCF, and through my sophomore and junior years, did not involve myself with a worshiping body while at school.  All the while, my call to the ministry grew increasingly sure -- increasingly urgent -- but it did so with a woeful lack of guidance.  In reaction to the liberalism, hedonism, even paganism I felt surrounded by, I clung all the tighter to a traditional, conservative "moral high ground," and felt it was my duty to speak prophetically against what I saw taking place around me.

In response, for instance, to the Gay, Lesbian, and Bisexual Alliance's awareness day, I wrote a letter to the editor of the campus' newspaper, The Wooster Voice, to attack their request that the campus community wear denim in a show of support for their "cause" -- whatever that might be.  I argued that it was disingenuous for them to choose denim, the most popular fabric in the Western world, as a way to inflate the number of those whom they counted "supporters," without warning the campus ahead of time that those who wore denim might be supporting their "sinful lifestyle" unawares.  I closed my letter by saying, "Please excuse me, I have to go iron my khakis."

The campus-wide backlash to my published letter was immediate.  Angry students stopped to berate me on the campus sidewalks.  When I arrived at Wooster Chorus rehearsal, the unbridled fury of my fellow choristers was so palpable, I excused myself from rehearsal early and fled.  Letters of response appeared in the next issue of the Voice.