Faith and the Power of Evidence 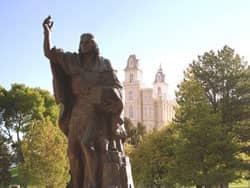 Since the publication of the Book of Mormon in 1830, its adherents have sought, found, and enjoyed publishing evidences in its support. What spiritual value do such evidences have? How do bits of knowledge contribute to an increase of faith? How do reason and revelation work together? What is evidence, and how is it related to faith? Without diminishing the essential power of the Holy Ghost in bearing testimony, and knowing that we cannot prove anything in absolute terms, I still speak favorably about the power of evidence. It is an important ingredient in Heavenly Father's plan of happiness.

Evidence plays several specific roles in the cultivation of faith. Comments by General Authorities and personal experiences by many people are instructive and have affirmed various functions.

Elder John A. Widtsoe taught that evidence can remove honest doubt and give assurances that build faith. "After proper inquiries, using all the powers at our command," he said, "the weight of evidence is on one side or the other. Doubt is removed." "Doubt of the right kind -- that is, honest questioning -- leads to faith" and "opens the door to truth," for where there is doubt, faith cannot thrive. Elder Joseph Fielding Smith likewise affirmed that evidence, as convincing as in any court in the land, proves "beyond the possibility of doubt that Joseph Smith and Oliver Cowdery spoke the truth."

Evidence also makes the truth plain and plausible. In 1976 Elder Maxwell predicted: "There will be a convergence of discoveries (never enough, mind you, to remove the need for faith) to make plain and plausible what the modern prophets have been saying all along." I believe that this prophecy has been amply fulfilled in the last twenty years. Literally hundreds of newly discovered insights converge on the same supporting conclusion. Certain things that might at first have appeared outrageous, on closer inspection have turned out to be right on target. The ancient Jaredite transoceanic migration that lasted 344 days (see Ether 6:11) ceases to seem so fantastic when that turns out to be exactly the length of time it takes the Pacific current to go from Asia to Mexico. The oddity of Nephi's making new arrows when only his bow had broken suddenly becomes plausible when one realizes that arrows and bows must match each other in weight, length, and stiffness, again making "plain and plausible" what the Book of Mormon has said all along.

In an important sense, evidence makes belief possible. I am very impressed by the words of Austin Farrar in speaking about C. S. Lewis and quoted by Elder Maxwell on several occasions: "Though argument does not create conviction, lack of it destroys belief. What seems to be proved may not be embraced; but what no one shows that ability to defend is quickly abandoned. Rational argument does not create belief, but it maintains a climate in which belief may flourish."

Faith, Choice, and the Nature of Evidence

People often misjudge the nature of evidence because, la Perry Mason, they may take an overly simplistic view of evidence. The concept of evidence is complex. The power of evidence is shaped by metaphysical assumptions (such as causation) and cultural conditions (such as the value placed on proof), and it combines wide fields of human experience (including such philosophical concerns as epistemology, the reliability of sensory experience, the adequacy of language, the nature of history, and the psychology of persuasion).

The word evidence derives from the Latin ex videns, meaning anything that comes from seeing and also from seeming. Evidence is literally what meets the eye and, more than that, what seems to be from what we see. Evidence is based on hard facts, but even under the best of circumstances it works less automatically and more subjectively than many people realize. If evidence were not such a complicated matter, many things would be much simpler in our courtrooms, legislative sessions, and corporate board rooms as well as in our lecture halls and Gospel Doctrine classrooms.

Though this complexity may present problems in many cases, it also allows evidence to combine with faith, because in its complexity evidence is both a product of empirical data attractive to the mind amenable to study and the result of personal choices generated by the Spirit in faith. Not only is seeing believing but believing is seeing, as has been often said. Philosophical worldviews that would have it only one of these two ways offer us a model that limps on one leg.