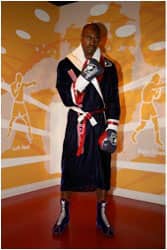 Sports and religion are a volatile mix, but for many African American athletes, it can either mean immense popularity or career-crippling critique. The recent history of African American athletes in the 20th century has included demonstrative Christian messages, prominent conversion experiences, chastity, and the promotion of the Mega-church prosperity Gospel movement. From Black Islam to Islam, to Black Nationalism and Evangelical Christianity, African American athletes have contrasted their abilities on the courts, canvas, and field into messages of spirituality that at times have clashed with their public personas.

For many of these athletes, religion provides not only spiritual solace, but in many ways it also provides a way to express the social, religious, and political beliefs that mirror their experiences as blacks in America. And even though many teams have chaplains, or spiritual advisors, these athletes pursued particular religions as a way to express their support for racial equality. Religion became paramount not because the individuals were expressly religious, but because the racial mores of the civil rights era set the stage for their conversions, inspiring and challenging those who supported these athletes.

With the advent of the civil rights movement and the incremental removal of the color line prohibiting blacks from sports participation in a broader context, the conversions and religious lives of sports figures of African descent would become part of the narrative surrounding the athletes. For Cassius Clay, his conversion to Islam and the changing of his name first to Cassius X, then to Muhammad Ali would put him into a even greater spotlight, just as his relationship to the Nation of Islam and Malcolm X would become an important part of not just his faith, but of his public persona.

Ali credited his Muslim faith for helping him to win a big fight against Sonny Liston in 1964. The morning after the fight, Ali declared his conversion to the Nation of Islam. The conversion would come as a surprise to the general public, yet Ali had been in relationship with the NOI since 1961 and had been befriended by Malcolm X as well. The conversion and his subsequent appearances with Elijah Muhammad, leader of the Nation of Islam, and his refusal to serve in the Vietnam War, would cost Ali his Heavyweight title, and ban him from the ring for years. The ban plus his religious convictions combined to make him a formidable figure not only in the boxing world but in the religious world as well. Later, Ali would convert again, this time to Sunni Islam in 1975, following Elijah Muhammad's son, Warith Deen Muhammad. Later yet he became a Sufi.

Lew Alcindor, a Catholic basketball player, converted to Islam, becoming Kareem Abdul-Jabbar in 1969. Abdul-Jabbar's conversion also received a storm of criticism from those within and outside of the sports world. Both Ali's and Abdul-Jabbar's conversions to Islam were not only personal religious commitments, but commitments to their discovery of a broader heritage and history of the African Diaspora, as well as a response to the racism they and others experienced both in the sports realm and the public spaces of America. Mike Tyson, boxer, also converted to Islam while in prison for rape. Prior to the conviction, Tyson had also been baptized a Christian by Jesse Jackson.

For other players, it would be Christianity that provided the most support for their spiritual and athletic aspirations. Basketball player A.C. Green, of the Los Angeles Lakers and the Phoenix Suns, gained notoriety within the NBA for his Christian beliefs, and his well-publicized, celibate status. According to Green, teammates consistently tried to send women to "trip him up," but Green held to his vow of celibacy, which ended in 2002 with his marriage. Green, now retired, organizes abstinence talks and other activities for youth through his A.C. Green foundation.

For others, focus on the prosperity gospel would relieve them of their material prosperity, replacing it with the prosperity of association and support. Evander Holyfield, who had the misfortune to have his ear partially bitten off by Mike Tyson, found solace and bankruptcy by following after the prosperity gospel televangelist Creflo Dollar. Holyfield gave millions to the evangelist, which crippled his divorce proceedings and caused his multi-million dollar Atlanta home to go into foreclosure. Holyfield's insistence that he would pay his tithe before paying his mortgage set off a firestorm of criticism from the press.

About Anthea Butler
Anthea Butler is currently Associate Professor of Religion, University of Pennsylvania. Her most recent book, Women in the Church of God in Christ, Making A Sanctified World published on the University of North Carolina Press, chronicles the history...