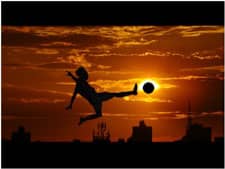 Traditionally religious people bristle at the comment, "My church is Fenway Park!"  Even "Touchdown Jesus" can create a paradox for some between the Catholic identity of Notre Dame University and the violence of football.  Yet, we regular church goers have to admit that a "Flyers-Devils" game does more to excite the crowd than Sunday Mass; the Super Bowl trumps the pope in getting attention.

The answer to the first question comes easily.  "Sports are religion."  That is, sports offer a communal world view, they tell great stories, athletic contests engage the ritual imagination, and a fair contest relies on a moral code.  Sports replace religion because, for the most part, they engage both athlete and spectator more effectively than organized religion.

When it comes to religion, often enough one's first experiences constitute little more than being a passive spectator.  Biblical tales sound like ancient history and too many hymns sound like a funeral dirge.  Compare that to a good fight song or the ritual participation in an engaging story.

Michael Novak in The Joy of Sports explores baseball as a particularly American tale of our "search for home."  The game also brings to the fore the inherent tension between the individual and the communal.  The one-on-one contest of pitcher and batter gets played out with runners and the defensive plays of those on the field.  Football, Novak proposes, speaks of the violence of life. The struggles of the steel towns of Pennsylvania, he suggests, account for the game's extensive popularity in that region.

Soccer perhaps speaks of a hoped-for new day in American culture.  Unlike other sports the rules of the game do not differ for men and women.  Unlike the World Series of baseball, the World Cup does involve the world.

Few athletes or spectators actually reflect on the stories being told.  That doesn't mean, however, that they don't know their truths.  Ritual can immerse the participant in the truth at a level far deeper than abstract articulation.  The play is well organized.  Team uniforms, mascots, songs, and cheers capture sight, sound, and voice.  Athletes prepare with a special meal, a locker room talk, and warm-ups.  Fans don team colors and tailgating serves as their warm-up.

While people filled churches in the days after 9/11, the resumption of baseball told us that life would go on; we would survive.  Baseball with added banners, flags, and "God Bless America" signaled a healing and unity of spirit that stretched beyond diverse sanctuaries.

So, what might churches learn from the world of sports?  First, in a spirit of missionary evangelization, churches would do well to "name the god" the people already know.  For many people their most powerful moments of transcendence have come with sports.  Employing these "signals of transcendence," like the ancient Greeks' experience of "truth, beauty, and goodness," churches would do well to explore and articulate the gracious presence of God in the midst of human play.  Ignatius of Loyola writes of "finding God in all things."  John Baptist de La Salle reminds believers that they are "always in the holy presence of God."  One wonders sometimes if Christians really believe this spiritual wisdom, if Christians really take seriously the full mystery of the Incarnation.

Second, while Catholics in particular often speak of the liturgy as the "work of the people," we might do well to further explore this goal of "full, active, and conscious participation" more in terms of play.  While athletes work very hard, their real task is to play.  When we humans play we move out of chronological time and into kairos, time where God is present.  Work traps us in hours, days, and weeks -- too often seemingly endless

Finally, sports can give us some wisdom for the spiritual journey.  In baseball a .300 average means that one fails seven out of ten times.  Football moves forward because people get knocked down.  As "pilgrims and strangers in this world" our spiritual task lies in living fully in the moment, not arriving at a state of perfection.

The promise of another game and another season can teach us much about sin and forgiveness, the foundation for genuine self-esteem.

Christians have a great story to tell.  Perhaps with some inspiration from the world of sports we will train ourselves to tell it well and excite the crowd!

Fr. Frank Berna, OFM is the Director of the graduate program in Theology and Ministry at La Salle University in Philadelphia.