Frau Ruster and the Cure for Cognitive Dissonance 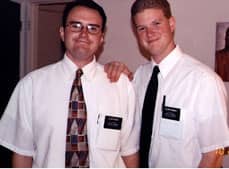 When Elder Callister and I leaned our bikes against the fence at Hermann-Löns-Straße 9 and walked to the door, I had no idea that what was about to transpire would shape and anchor my soul for decades to come. And when we left the house and descended the steps less than an hour later, I had no context for gauging the magnitude of the experience we had just shared. I'm still acquiring that context.

Herr and Frau Rüster were our best investigators. At least Frau Rüster was. Her husband tolerated our visits and was cordial, but his search for the truth was more hypothetical than it was either pragmatic or urgent. Frau Rüster, on the other hand, wanted to know. Oh, how she wanted to know. She was reading the Book of Mormon and praying about it. And her Reformed Lutheran pastor was so intrigued by her new quest that he decided to lend a hand. He generously transformed his weekly Bible study hour into anti-Mormon hour. I'm confident these new lessons took far more preparation than his conventional treks through the New Testament. Such sacrifice on his part! Frau Rüster, of course, was thoroughly confused. On one side she was hearing the missionary lessons and reading the Book of Mormon; on the other, she was being exposed to every bit of dirt, credible or concocted, that good Pastor Kühne could unearth.

More than thirty years have now passed since I last saw Frau Rüster, but hardly a week goes by that I don't think about her. I'm quite sure she crossed my mind a few years back when a departmental reorganization moved me from my editorial post at the Liahona to the Ensign. I was somewhat surprised to learn that the Ensign subscribed to both Dialogue and Sunstone and circulated them among the editorial staff. I couldn't help wondering about these subscriptions and the reasoning behind them. But then, the Ensign subscribed to many interesting publications: Journal of Mormon History, BYU Studies, Pioneer, Utah Historical Quarterly, The Religious Educator, Journal of Book of Mormon Studies, Newsweek, Time, Reader's Digest, Biblical Archeological Review, Desert Saints, the Seventh-day Adventists' Signs, Billy Graham's Decision, the Community of Christ's Herald, and my own personal favorite, Vision, a magazine aimed at the restoration branches that split off from the Reorganized Church of Jesus Christ of Latter Day Saints in the 1980s. I figured somebody wanted the editorial staff to be informed. I wanted to be informed too. So I read all these periodicals. Took them on the bus with me as I commuted between Orem and the [LDS] Church Office Building.

I learned a great deal. I learned that Tommy Lasorda coached in Ogden before he became famous in L.A. and that young Heber J. Grant had an affinity for beer. I learned that Seventh-day Adventists are saved by grace and so is Billy Graham. I learned that Newsweek has better cartoons than Time. I learned that the Community of Christ doesn't like to quote Joseph Smith. In fact, to me, they seemed a bit embarrassed at the uncomfortable fact that he is still considered their founder. I learned that, as of a couple of years ago, the restoration branches were squarely between a rock and a hard place. They believed their First Presidency and Quorum of Twelve Apostles had apostatized en masse a couple of decades ago. They wanted to organize a new church, at least a stake, but they couldn't because the revelations they still revere declare that only the First Presidency can organize a stake. I'm wondering how things will eventually shake out.

I also learned that the Garden Tomb really wasn't the place where the Savior's body was laid to rest. I learned that it was actually Sidney Rigdon who wrote the Lectures on Faith and that some of the "doctrine" in them is rather, shall we say, Protestant, and this may explain why the lectures were eventually dropped from the Doctrine and Covenants.

But of all these publications I was reading, Dialogue and Sunstone were most informative. I learned that adultery might, in fact, not be the sin next to murder. I learned that Napoleon Dynamite's Happy Hands Club represents the female cross-brain function. I learned that Noah's flood may have submerged only the Black Sea area and may have happened about 5600 B.C. I learned that the universe might be just a small portion of a more comprehensive multiverse. And I learned that in our corner of this hypothetical multiverse lives a whole host of very unhypothetical Mormons and former Mormons and half-Mormons and quarter-Mormons and quasi-anti-neo-post-meta-counter-pseudo-Mormons who wrestle with dozens of issues and questions -- everything from Native American DNA and polygamy to priesthood equality and evolution. I learned that, spiritually speaking, some of these issues have blown people adrift and have blown others apart. I learned that many intellectuals and individualists and iconoclasts have enormous frustration and microscopic patience with the perceived inflexibility and irrationality of Church bureaucracy. I generally shook my head and rolled my eyes at this last group. They had obviously never worked at Church magazines. What did they know?