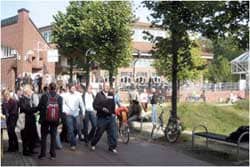 The transition to college life can be particularly difficult; for many it is the first time living away from home and the lack of structure can shake some students down to their foundation. But it is also a great time for students to ask the "big questions" about their lives and beliefs. Fortunately, most campuses are well equipped with people who can help with this sort of seeking.

We found spiritual leaders representing four different faith traditions from campuses across the country - from Columbus, Ohio and New Orleans, Louisiana to Southern California - and asked them to talk with us about the issues they see among new students and how they suggest dealing with them. With religious diversity on the rise and religious knowledge on the decline we spoke about the state of interfaith relations on campus and how students can best navigate the exciting - but sometimes dangerous - waters of college life.

Busted Halo: What advice do you give to a friend or relative just starting college? If you could, condense it into one piece of advice.

Prof. Amir Hussain (Loyola Marymount University, Los Angeles): On all my syllabi I give students a two-page handout that talks about that. As professors we sort of assume that students will understand the difference between high school and university but no one tells them! The kinds of things that they can expect in high school are totally different than your university professor.

Rev. Scott Young (Protestant campus minister): The two things I would say are first that friendship is the most important thing in life, and spiritual friendship is really important, Four years of a concentrated pool of friends that you won't have, most likely, anywhere else in the rest of your life. In addition to all the other things you feel you need to accomplish, learning how to be a friend and finding friends is an indispensible life skill. That started in high school but it's very different doing that in college. But it needs to be stated and there's a skill to it that needs to be learned. The other thing is that since we're such a career-crazed kind of training program these days in college, a reminder that you're here to learn how to learn. You get to learn for your entire life and you've got a concentrated period of time around a bunch of learners that know how to learn so...learn how to learn.

Rabbi Yonah Schiller (Executive Director of Hillel at Tulane University, New Orleans): The healthiest approach to college -- and I find that people are in the toughest place when they don't exercise this right -- really experiment, experiment and flex your curiosity. What gets people in trouble is that they find the same friends, they find the same things to do. College affords you access to great professors, people you never would have been friends with before, and experiences that would have not been deemed cool to take part in while in high school. These opportunities breed a sense of search and exploration and ultimately, meaning. That's the thing. If I were to really tell incoming students one thing it would be "Make sure college is meaningful!" but that wouldn't say anything. The only way to do that is to say this: it's really an amazing time to explore a bunch of different things, and to really take advantage of that.

Taken from Busted Halo's Freshman Survival Guide, which will be published in an expanded book form by Hachette Book Group USA in April 2010. To read the entire article, click here.