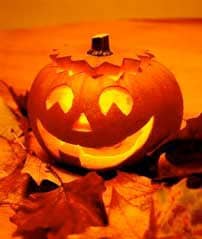 Like many other holidays, Halloween has evolved over the centuries, combining traditions from many different countries, cultures, and religions. Ancient non-Christian (pagan) practices combined with Christian beliefs, the traditions of European immigrants, and American film and literature to create the holiday we now know as Halloween.

One strand of these origins can be traced back to the ancient Celtic festival of Samhain, which, on October 31, marked the eve of the new year. All fires were extinguished, and a new ceremonial fire was lit from which all hearth fires were kindled. The date was also associated with the commemoration of the dead. Both good and evil spirits were thought to return to the living, and the gods played tricks on mortals. It was the most auspicious time of year to seek divine help in health, marriage, and other matters.

Many historians believe that medieval British Christians tried to dissuade people from participating in pagan traditions by adding a Christian celebration to the calendar on the same date as Samhain. The Christian festival, the Feast of All Saints (later called All Saints' Day), commemorates the saints of the Christian religion, just as tribute was paid to Celtic deities on Samhaim. The name of All Hallows' Even (evening) for the night of October 31 (hallows being an old word for saints) evolved into the name of Halowe'en, or Halloween.

Over time, Halloween became a mostly secular holiday and was heavily shaped by European immigrants to the United States.

The tradition of "trick or treat," for example, harks back to traditions of giving alms on that night, especially in Scotland. Jack-o-lanterns date to an Irish legend about a farmer who was cursed by the devil and condemned to walk the earth at night with no light but a candle in a hollowed turnip. The association of witches with Halloween came from German immigrants, who brought with them the traditions of Walpurgisnacht, a night of mischief and mayhem when bonfires were lit for protection against evil spirits.

Wearing costumes and masks at Halloween is part of the holiday's pagan legacy: in an attempt to placate evil spirits, some people dressed in white and wore masks or blackened their faces.

More recently, classic American and European fiction and horror films have deeply influenced the popular themes and imagery surrounding the holiday, from Frankenstein and Dracula to mummies, zombies, and the Grim Reaper.

Given the part-pagan origins of Halloween, it is not surprising that some Christians consider the holiday incompatible with Christian belief. Others emphasize the Christian traditions of All Saints' Day. For most Americans, Christian and non-Christian alike, any distinctive pagan elements have long since blended into the rich amalgam that is American culture.