In the Zone: The Zen of Sports 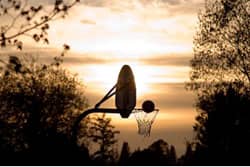 Right away, you could see the streak was over. As he turned and headed back upcourt, Michael Jordan looked over at network announcer Magic Johnson and shrugged, as if to say, "It's beyond me. It's just happening by itself!"

It was the first game of the 1992 NBA finals, the Bulls against Portland. His Airness had just sunk his sixth consecutive three-pointer, and in that moment it appeared as though even he was overwhelmed by the immensity of his gift.  And that was the giveaway. He had become self-conscious, and so he had lost that edge, that intensity of concentration in which limitations are forgotten and the spirit is set free to soar. Even for Michael Jordan, visiting hours on Olympus are limited.   Michael Jordan is no common athlete, and his shooting display was certainly no common feat. But for all its spectacle, his experience -- its nature, its inner life -- is not that unusual, after all.

Several miles and countless worlds away from Jordan's Chicago home court, a University of Chicago psychology professor, Mihalyi Csikszentmihalyi, had recently gathered the results of twenty-five years of research into a book that sheds more light on Jordan's performance than you are likely to find in any sports column.   In Flow: The Psychology of Optimal Experience, Csikszentmihalyi identifies a self-surpassing dimension of human experience that is recognized by people the world over, regardless of culture, gender, race, or nationality. Its characteristics include deep concentration, highly efficient performance, emotional buoyancy, a heightened sense of mastery, a lack of self-consciousness, and self-transcendence.

Csikszentmihalyi calls the experience "flow"; today's athlete calls it being in "the zone."  The zone. All athletes know it, strive for it, prize its attainment. It is that realm of play in which everything -- skill, training, and mental discipline -- comes together, and players feel themselves lifted to a level of peak performance in which limits seem to fall away.

The zone is the essence and pinnacle of the athletic experience, for it reveals that, at their root, sports are a theater for enacting the drama of self-transcendence. Athletes and fans alike, focused as we so often are on the game of winning and losing, miss the deeper significance that is right before our eyes. But in the zone, the extraordinary capacities that lie within each individual are made manifest. To grasp this hidden dimension is to transform the very meaning of athletic play.

Perhaps because moments in the zone are too compelling, too uncanny, too verging on the mystical, most athletes and sports journalists have been reluctant to address the experience in depth. But while those at the center of sports culture are reticent, a growing number of researchers are investigating the zone for what it can reveal about human motivation, development, and potential.

Sports psychologists, now fixtures in the high-pressure world of professional sports, draw upon visualization and meditation techniques in order to help athletes cultivate the concentration and calm that are prerequisites of the experience.  Sports psychology demonstrates that consciousness plays an essential role in athletic training. But the zone is about much more than the goal of peak performance. It provides a touchstone for approaching athletics as a spiritual path.

Though largely forgotten in contemporary culture, this understanding has been part of sports throughout history, from the Olympic games of ancient Greece to the marathon runners of Native America to the Ways of the martial arts.   The zone. The term is a fairly new development in the lexicon of sports culture, perhaps ten or twelve years old. It denotes a place, as in the dictionary definition, but much more than that. It calls up imagery of the supernatural ("the twilight zone") and carries an implicit connection to altered states of consciousness ("zoned out" or "lost in the ozone"), a connection made explicit by less popular related terms: "He was playing out of his mind." "She went unconscious."   But the zone, with its rich ambiguity and layers of meaning, says it best. It is indeed a place, but a map won't get you there.

While the term is recent, the experience it points to is not. In his autobiography, Second Wind: The Memoirs of an Opinionated Man, Bill Russell evokes the "mystical feeling" that would on occasion lift the action on the hardwood to the level of magic:

At that special level all sorts of odd things happened.... It was almost as if we were playing in slow motion. During those spells I could almost sense how the next play would develop and where the next shot would be taken. Even before the other team brought the ball in bounds, I could feel it so keenly that I'd want to shout to my teammates, "It's coming there!" - except that I knew everything would change if I did. My premonitions would be consistently correct, and I always felt then that I not only knew all the Celtics by heart but also all the opposing players, and that they all knew me.