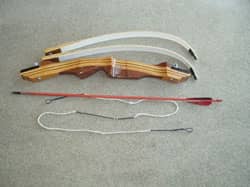 Pulling back on the bowstring for the first time, Wren marveled that she could actually do it at all. It certainly was more difficult than she had thought that it would be and yet it felt smoother and more fluid than she had anticipated. It wasn't a very big or a very fancy one. A simple straight bow, it had a pull of only about fifteen pounds or so. Halfway into her draw, Wren was a very, very happy Witch that she had decided not to go with anything heavier than this. When the 'break' finally came and the string at last came back and level to her ear, Wren inhaled and looked down the sight. Across the lawn a standard bulls-eye target wavered, then steadied before her eyes. (Well, one eye anyway.) Mentally checking her stance, she inhaled again, held it, and then gently released her arrow.

Not too bad for a first time. Low and about six inches beneath the center circle, her arrow still vibrated slightly. At least she hadn't missed it altogether. And as she was in the company of some guys who were pulling professional compound bows of sixty-five pounds and more, she had no doubts that a very prolonged -- and probably self-perpetuating -- round of guffaws would have followed her as she walked over to retrieve her point had she totally blown it. Nope, not too bad at all.

Twenty-something years later, Wren hasn't touched a bow in quite a while. But she can still recall quite clearly the technique and the 'feel' of her foray into the world of archery. The mental preparation, the perfecting of the physical stance, the focus and the intense concentration had taken several months to become a 'habit' rather than a mental checklist that she had to consciously run through each time she took up a bow or notched an arrow. What she remembers most is the delicious buildup of tension and controlled power that seemed to suspend reality for those last few seconds before the arrow was released into flight. Of course, she doesn't have to thump her memory very hard to recall any of these things; she still uses the very same techniques every time she works up some magic(k).

While her daughter, Skye was visiting, they went out scouting for bargains at antique malls and thrift shops. While on one of these jaunts, Wren picked up an old vanity bench for a mere eight dollars. Structurally very sound, it just needed a little reupholstering to make it a real gem. Thinking that she could use the bench for both extra seating and as a portable buffet table, Wren decided that a piece of red leather would be the perfect choice for the replacement cover. Trouble was, as usual, that finances were tight. She had spent about ten minutes that same day trying to decide if she could justify the fifteen dollars for a pair of pinking shears or the twenty for a staple gun. The 'little voice' that she relies upon while bargain-hunting whispered, "Nah!" and so she sent the requests for these little things into her 'psychic wish list folder'. In other words, she made it known to the powers-that-be (call them whatever you prefer) that these are things that she is looking for.

Wren didn't find an affordable piece of leather that day, or the scissors or the staple gun for that matter. But that's okay. Wren is a very practical and a very patient Witch. She knows that seldom does the Universe teleport physical items and drop them into her living room. But she also knows that if she projects her psychic wish list 'out there' consistently and with focused concentration, eventually things get rearranged -- and sometimes it's Wren's master plans that get rearranged! -- and the items either find their way to her or she to them. And as it turned out, that 'little voice' was correct once again.

Pagans who practice the martial arts or regularly engage in a sport know that the difference between sports psychology and magickal psychology is mainly in terminology only. The same values and training advice resonate throughout each venue. If you take a look at the steps outlined in Mind Tools-Sport Psychology, one can easily recall many occult or Pagan books and web sites that say pretty much the same thing. Substitute the words 'magic(k)' or 'spell' for 'sport' and there you have the basic outline for magickal mental and physical training in a nutshell.

Of course, the budding magickal practitioner or athlete still has to supply the will, the determination, the practice, and the intention to any such program if they are to develop any real proficiency in either one. One has to practice, practice, and practice before what once took conscious effort to recall or execute becomes a habit of thought and action. But once that level of expertise and experience in sport is reached, it is quite easy to pick up a bow or a tennis racket at any time and in any place and use it well. So it is also in magic(k). A mentor once told me that the most powerful occult practitioners he knew never seemed to leave their easy chairs. The magick had become second nature to them. They could slip in and out of altered states of consciousness and send out their projections as easily as the opening and closing of a door.