One Good Man... at the Movies 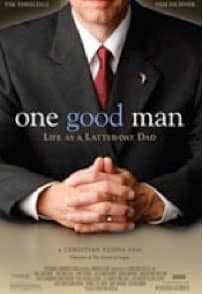 In the indie film scene - Sundance Film Festival fare, for example - "edginess" is king. Male characters off the street in indie movies are 50 times more likely to be drug dealers (or working for the mob) than in real life. Female characters are 50 times more likely to be lesbians. If there's a priest character, he's probably a child molester. If there's a married couple, one or both of them are probably cheating on the other.

It's "realistic" (because people like that do exist), but just a little skewed - a biased view of real life where edgy, darker material is unusually commonplace, often for the sake of conflict and drama.

In the LDS indie film scene, on the other hand - particularly in the films of writer/director Christian Vuissa - "edginess" is almost a bad word. As a stark contrast to the cynicism and nihilism of the typical indie film, Vuissa - who seems intent on becoming the anti-Richard Dutcher of the LDS film scene - presents movie worlds that are clean, pure, and idealistic to a fault.

One Good Man is so cheerfully innocent it's either a breath of refreshing optimism in a dark, cynical world, or something condescendingly naïve - possibly both. It's a movie so free of ‘edge' it's basically a perfect sphere.

Is that a compliment? I guess it depends on what you're looking for in a movie. One Good Man is well-produced with a decent cast, and will hit the spot of what a lot of LDS audience members are looking for - a feel-good experience that never touches anything intellectually or spiritually challenging. For everyone else, though, the lack of edge makes the film dramatically inert.

The title character is a forty-something man named Aaron, married with six kids ranging from 23 to 8. One day, he finds himself called to be bishop of his ward at the same time he is dealing with a lot of work and family stress.

He and his kids all face challenges, but - here's the problem - they are all "safe" challenges and trials. Nothing that would cause any of the characters (or anyone in the primary target audience) to reach out of their LDS comfort zones. Many of them aren't really "trials" at all in any sense of the word - rather just life circumstances that are stressful but ultimately happy.

The safeness of One Good Man almost makes it a funny exercise to ponder how an edgier indie film director might have handled these same characters and situations:

Aaron, the Dad:  He's honest, sincere, works hard, and cares about his family, his employees, and his ward. He has no bad habits, and there's never a hint he's ever had a heated argument with his wife, his kids, or anyone else his entire life.

Cindy, the Mom:  She always has a pleasant demeanor, and is fabulously supportive and loving of her husband in everything she does.

Laura (23):  Her "trial" is that she's getting married to a guy with non-member parents, who won't be able to attend their temple sealing.

Luke (19):  He is preparing for a mission, and is excited about it.  His biggest "trial" is that he still hasn't gone to the dentist yet.