Pagan and Wiccan Clubs in the University 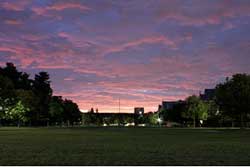 It's hard to be a Pagan club at a post-secondary institution. The first challenge we face is how to find new members. At the university I attend, the students' society puts on a Clubs Days event, two days in the second week of the September and January semesters. Each group lines up for and chooses a table, then needs to find enough members to be sitting at the table from 9 a.m. to 4 p.m. for those two days. This is not as easy as you might think -- Pagans in general are few in number, never mind people who are willing to sit at the table in a public place (difficult for those not out of the broom closet) when they have time.

In our club, most of the regulars are taking full course loads and don't have much "free time." Luckily for me, I have been a grad student these last two years and have a much more flexible schedule, but it means I am the only one at the table.

I founded our club in 2006, seeing a lack of Pagan clubs at our university. There had been one in the past, but they seemed to be on-again, off-again, and as far as I could tell, they only offered Sabbat rituals.

I come from a teaching tradition, and decided that this (my) club would be about teaching and learning, so over the past three years I have been teaching the members everything I can while learning from those who have expertise in areas I lack. I should add that I have been practicing for ten years and am in my 30s, whereas most of the membership is late teens to early 20s and therefore new to the faith. But the idea of a safe place for a peer discussion group about Paganism and Wicca has been very appealing to some, and a handful of members have stayed on since the beginning.

Sitting at the table on Clubs days is where we meet most of our potential members. In some ways, this has been a bit of "trial by fire," since we get a lot of weird looks, people who accidentally stop in front of our table (a few hundred tables are crammed into a room, so when the crowds come, there is barely room to move) and then rush away when they realize what we are, people who ask about Satanism and animal sacrifice... We get some real off-the-wall kinds of questions about what we do.

And then some people see our sign "Pagan" and sign up without even talking to us -- they just know they want to be a part of this. (In theory, at least, since less than 10% of the people who sign up actually come to our meetings and events.)

While the city I live in has a one of the largest numbers of people who identify as Pagans per capita (in Canada), there is a generally high tolerance and acceptance for an obscure faith such as ours. Yet being on public display does leave us vulnerable.

Case in point:  At our last Clubs Days, a man in his 40s, an immigrant, noticed a book on our table (Starhawk's The Spiral Dance), and seeing the word "dance" in the title, thought we were a dance club.

I explained to him that no, we are a religious club, and that spiral dancing is sometimes a part of ritual.

He mentioned he had just signed up for the ballroom dance club and wondered if I was going to join or if I had joined too.

He said something about all the women in that club being so young, something about not mature like me... and immediately I was suspicious. This man was flirting with me, even though I had my wedding ring in plain sight. He signed up for our club, but I prayed he wouldn't show up.