The following are excerpts of the address Pope Benedict XVI gave at a meeting in Prague on September 27, 2009 with representatives of the world of academia and culture. 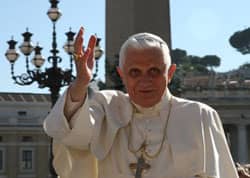 I address you as one who has been a professor, solicitous of the right to academic freedom and the responsibility for the authentic use of reason, and is now the Pope who, in his role as Shepherd, is recognized as a voice for the ethical reasoning of humanity. While some argue that the questions raised by religion, faith and ethics have no place within the purview of collective reason, that view is by no means axiomatic. The freedom that underlies the exercise of reason -- be it in a university or in the Church -- has a purpose: it is directed to the pursuit of truth, and as such gives expression to a tenet of Christianity which in fact gave rise to the university.

The proper autonomy of a university, or indeed any educational institution, finds meaning in its accountability to the authority of truth. Nevertheless, that autonomy can be thwarted in a variety of ways. The great formative tradition, open to the transcendent, which stands at the base of universities across Europe, was in this land, and others, systematically subverted by the reductive ideology of materialism, the repression of religion and the suppression of the human spirit. In 1989, however, the world witnessed in dramatic ways the overthrow of a failed totalitarian ideology and the triumph of the human spirit. The yearning for freedom and truth is inalienably part of our common humanity. It can never be eliminated; and, as history has shown, it is denied at humanity's own peril. It is to this yearning that religious faith, the various arts, philosophy, theology and other scientific disciplines, each with its own method, seek to respond, both on the level of disciplined reflection and on the level of a sound praxis.

The idea of an integrated education, based on the unity of knowledge grounded in truth, must be regained. It serves to counteract the tendency, so evident in contemporary society, towards a fragmentation of knowledge. With the massive growth in information and technology there comes the temptation to detach reason from the pursuit of truth. Sundered from the fundamental human orientation towards truth, however, reason begins to lose direction: it withers, either under the guise of modesty, resting content with the merely partial or provisional, or under the guise of certainty, insisting on capitulation to the demands of those who indiscriminately give equal value to practically everything. The relativism that ensues provides a dense camouflage behind which new threats to the autonomy of academic institutions can lurk. While the period of interference from political totalitarianism has passed, is it not the case that frequently, across the globe, the exercise of reason and academic research are -- subtly and not so subtly -- constrained to bow to the pressures of ideological interest groups and the lure of short-term utilitarian or pragmatic goals? What will happen if our culture builds itself only on fashionable arguments, with little reference to a genuine historical intellectual tradition, or on the viewpoints that are most vociferously promoted and most heavily funded? What will happen if in its anxiety to preserve a radical secularism, it detaches itself from its life-giving roots? Our societies will not become more reasonable or tolerant or adaptable but rather more brittle and less inclusive, and they will increasingly struggle to recognize what is true, noble and good.

Read the entire address at Zenit.org.