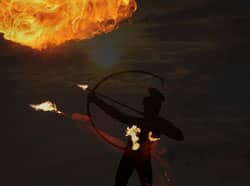 Some years ago, in a very lengthy essay, I painstakingly traced a nearly ubiquitous red thread through postwar German literature: the concept of sports, games, and certain toys as a kind of psychological preconditioning for and symbolical prelude to war. (It turns out German writers after 1945 were virtually obsessed with trying to find out what kinds of subtle things had, in their horrible totality, added up to Hitler and the Holocaust. Sports and games were high on their list.)

Later I was asked to give a lecture on the idea to a group in the BYU Honors Program. With the idea of making things more "relevant," I took the liberty of appending a short aside about certain related phenomena at Brigham Young University. This was not terribly well received, even by many of my friends, most of whom are loyal Cougar fans, but there follows here a brief summary of some of the things I said that day.

In my article and lecture I referred to a well-established historical tradition of athletic games played before major battles to determine the will of the gods. Johann Huizinga, in his book Homo Ludens (something like the standard work on games and play) cites such typical examples as that in the book of Second Samuel (2: 14ff), where one commander-in-chief says to another: "Let the young men now arise and play before us. And there came twelve from each side [i.e., each army] and they caught everyone his fellow [i.e., opponent] by the head and thrust his sword into his side, so that they fell down together."

Like the related case of David and Goliath, this gory game was a form of divination, "a concise proof," in Huizinga's words, "that the cause of the victors is favoured by the gods, is therefore a just cause."

The game of chess, though more cerebral and not at all overtly bloody, is also a form of portentous divination of the outcome of pending battles. (Checkmate -- Shah-mat -- once meaning "the king is dead" has been softened to mean: the king is threatened and the game is over.)

Chess still has the power to move people on some unconscious level to burden a simple game with far reaching cosmic significance, just as it did anciently. When the very eccentric American Bobby Fisher defeated Soviet chess champion Boris Spassky at the height of the Cold War, for example, millions of Americans saw this as a sign of American superiority, the triumph of eccentric Yankee individualism over the programmatic, lockstep Soviet style. At about the same time a (very rare) victory of the American hockey team over the Soviet team evoked similar euphoria.

But here an interesting psychological quirk manifests itself: We divine the will of the gods or of fate only when our champion or team does well. When the other champion succeeds, we must invent excuses. So when Fisher or the U.S. hockey team won, our system had proven itself. When the USSR (or even little East Germany, the GDR, with 16 million people) won gold medal after gold medal at the Olympics, it was because they cheated and used drugs and professional athletes, etc. (All of which was true, incidentally.)

Imagine, a bit closer to home, a hypothetical BYU fan. When BYU wins in a "miracle finish" over, say, Notre Dame or Baylor or some other Church-related school, our fan may feel that the superiority of Mormonism has been demonstrated and may even expect the missionary effort to be more successful. (Of course this is absurd: My brother-in-law, who was once the Mormon mission president in Albuquerque, assures me that his missionaries almost had to go into hiding whenever BYU played New Mexico.)

If BYU is defeated by Notre Dame or Baylor I doubt very much if our typical fan would feel the slightest inclination to convert to Catholicism or become a Southern Baptist, just as no red-blooded American apparently ever converted to Communism even when the Soviet Union and its satellite states invariably took home the lion's share of Olympic gold.

There is another aspect to all this: historically, not only are athletic games symbolic preludes to battle, they are also designed to prepare the participants and the spectators -- psychologically and physically -- for actual war. The games of ancient Greece clearly demonstrate this aspect of athletics. Whether in chariot racing, the no-holds-barred pankration (meaning: "all force"), the javelin throw, the hoplite race in full armor, or in less obvious martial contexts like the long jump -- itself designed to test a soldier's ability to cross ravines and streams quickly -- and the discus (like the shot, a hurled stone weapon), the military training of Greek sport was always paramount.