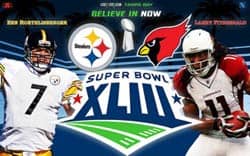 In times of economic crisis, political turmoil, environmental disasters, and global conflict, Americans rely on a time-tested, highly effective collective response to the challenges we face: play ball. Though the Super Bowl is certainly a much needed, entertaining distraction from the real world collapsing around us, it provides more than just a temporary refuge from harsh and painful realities. This annual event - as American as guns and apple pie - is a ceremonial ritual as religious as any one might find in the monotheistic traditions. Super Bowl XLIII, pitting the Pittsburgh Steelers against the Arizona Cardinals, may only have been a game but, as with most sacred matters, the stakes are of ultimate importance, with the material and spiritual investments likewise incalculable.

The Sacred and the Super Bowl, Play and Religious Life

Let's start with one of the most memorable moments in the history of the game -- the nipple incident. When Janet Jackson's exposed breast and starburst-covered nipple flashed for seconds during the halftime celebration at Super Bowl XXXVIII in February 2004, the sacred dimensions of sports and the high stakes of play were put into high relief in the uproar that followed. This championship battle between the AFC's New England Patriots and NFC's Carolina Panthers was overshadowed by a bare female breast, a decidedly unusual sight at the big game, even for viewers who are repeatedly exposed to female cleavage, bouncing breasts, camera shots angled from the ground looking up skirts, and other images associated with the female cheerleaders -- a staple of the game. Although male nudity was a common feature of the ancient Greek games, where bodily control, self-discipline, and military ideals reigned supreme, female nudity was not. Women watched the competition from the stands and participated in the surrounding religious and civic festivities. The male athletic body, nude in ancient Greece, fully clad with extra padding and a helmet in contemporary American football, dominates the field in sports and, though competition may verge on the erotic for some (both then and now), it is generally framed in militaristic rather than sexual terms.

The breast crossed a line for many viewers and spectators, who were stunned at what was frequently perceived to be an intentionally provocative act. Staying within the lines, playing by the rules, maintaining boundaries that ensure order - these are essential preconditions for sports play, as well as for military and religious institutions. For each of these highly disciplined, body-monitoring activities, lines, rules, and boundaries are established around bodies in part because of the human propensity to cross, break, and transgress them. These transgressions create moments that contravene expectations of order and stability, structure and control, but there are also scandalous and thrilling breakdowns that captivate, or even enrapture, a public routinely salivating for people who go too far.

Violence between players on the field, a fight between fans in the stands, the growing scourge of steroids and other performance-enhancing drugs, gambling scandals; these and other ignominious sports stories have moral import -- as entertaining or as tragic as they may be -- for larger social communities with members whose ethical formation and principles are shaped as much by play on the field as by words in a church. Indeed, morals are tested on these playing fields, where the temptations to transgress, deceive, and cheat are so compelling for players and sensational for fans that every game is a ritual reminder and reaffirmation of rules and laws, boundaries and prohibitions that will, out of necessity, break down. The well-regulated male body in competition is a morally-charged, ethically-challenged body that is, however, only one piece in the larger religious complex of sports.

No doubt the moral outrage that erupted upon seeing Jackson's breast reverberated across all kinds of communities. Christians, Jews, and Muslims, Hindus and Buddhists, even atheists and pagans (well, maybe not pagans) vigorously complained about such an offensive act, especially as the halftime show is considered to be a shared, family viewing experience, with vulnerable children who can easily be led morally astray. Their fury may have derived from a New Testament understanding of a woman's place; or it might have emerged from a strong political commitment to what has come to be known as "family values"; or, it may simply be based on a less tolerant understanding of the line separating decency from indecency. The range of people who complained and the impact of the collective crisis and debate about the nipple also point to a deeper significance, one that is especially pronounced during this event. The breast was clearly matter out of place. For a brief moment this particular part of Janet Jackson's anatomy illustrated the very inviolability of the Super Bowl, an event as sacred and ritually fulfilling as any holy day marked off on religious calendars around the world.