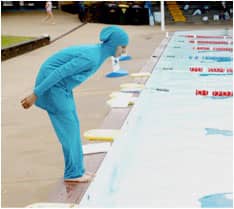 I bet people get tired of hearing about veils and clothing from me, but what am I to do? Yet again, the issue has arisen.

A swimming pool in the Paris suburb of Emerainville has refused entry to a young Muslim woman wearing a burqini. The woman came swimming in July, but when she returned in August, they were ready with a ban and an argument to buttress the ban. They claimed it was because her burqini was everyday clothing rather than swim attire.

The rules to public pools usually don't permit everyday clothing in the pool. Presumably this is because of safety and hygiene issues, both of which are important ones, given the risk of drowning and of exposure to nasty germs in a public pool.

Is a burqini unsafe? There are no issues with floatation, since the fabric is the same as a regular swimsuit. It's not an abayah that will get in the way of your limbs, or a dress that will fill up with water and drag you down. It's simply a swimsuit that covers more of your body. Why is that even an issue of note? If scuba divers wear wetsuits, why is the burqini a problem?

As for hygiene, wouldn't it be better to cover up more of the body so people could keep their germs to themselves and not bring others' with them?

If a woman is willing to brave the gaze that is sure to turn upon her when she walks into the pool area in a burqini, why, let her swim, I say. It's quite an exercise in character.

I'll confess that I'm one of the people who avoid those stares. My lack of physical fitness is evidence of my fear.

I'm willing to bet that this is only one case of many that haven't made it even close to the news. And many more are the women who encounter hostility, or ridicule, or intimidating stares, or outright questioning -- everything short of prohibition to enter -- and avoid the pool (I can cite one friend's experience right here in Oklahoma). Women stay home and forget about getting their exercise. Was that what y'all wanted? Stay away from the good Christian-secular pools? The woman prevented from swimming may have an argument when she argues that this is simply segregation.

Strictly speaking, the liberators of Muslim women ought to jump up and down in joy if these oppressed women make it as far as a co-ed public pool. They'll get some exercise; they'll spend some time developing physical strength away from their dark-browed, swarthy, bad-tempered fathers and husbands. The endorphins and resulting euphoria might result in a sense of physical and emotional freedom. What could be better? Hell, they might make it as far as throwing off their yoke and joining the ranks of the liberated.

Swimming is probably the best form of cardiovascular exercise for almost everyone, including individuals with depression, obesity, arthritis, diabetes, and various age-related ailments. Unlike jogging, it does not cause strain to your joints. Water calms you. Swimming makes you happy. Come, now, don't those poor backward Muslim women need some health and happiness?

I know I won't find universal agreement on this point, but I find conventional swimsuits to be inherently erotic attire. Ask any guy perusing a swimsuit edition. Of course you are free to consider me silly, Victorian, uptight, narrow-minded, or culturally alien. But this is how I feel. And I would like to go swimming but not in a one-piece from Wal-Mart. You are free to disagree with me, but I am also free to feel the way I do. There are people who feel free to go to work without deodorant, or underwear, or appropriate coiffure, with worse consequences than a burqini might have on others. I wish people would take up arms against those offences.

In my opinion, given how I perceive swimsuits, it's extremely unfair and sexist to require women to dress in such attire. The choice to wear a burqini, or long swim shorts, or such swim attire should be equal rather than either banned or inferior among choices in a pluralistic society. The only conditions should be floatability, safety, and hygiene. Aesthetic considerations for women's swimsuits are anti-feminist, and Muslim women shouldn't be the only ones in this fight. In my personal experience, Muslim women are not the only women (or men) who would like some latitude, please, in their choices of swim (and other) attire. Not all people like to share the shape or sight of their bodies with others, particularly strangers, and certainly in this age of freaks, psychopaths, and weirdos. Many women would like the freedom to not shave their legs or to go bald. You may not like it, but you can't pass laws or rules against their use of public spaces.