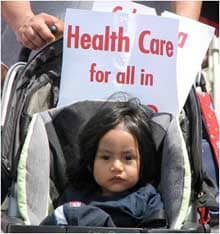 When the current administration announced that it would prioritize health-care reform and seek to propel America toward a sustainable system of universal health care, I thought: finally an issue on which Orthodox Jews can join together to support reform. After all, the Torah and the rabbinic writings unequivocally enjoin us to heal the sick and to enable the sick to be healed. If the secular state was championing an issue that speaks to our deepest religious communal values, there could only be cause for celebration.

And yet, recent articles and discussions suggest that, to the contrary, the majority of the Orthodox Jewish community has taken a stand in opposition to the proposed reforms that would help America become a society that can heal all of its sick. Are these dissenters cynical to proposals such as the nonprofit health-care cooperative or a public insurance plan? Regardless of the reasoning, the Torah has been excluded from this discourse. Let's consider what the Torah has to say about health care:

The Talmud (Gittin 61a) teaches us explicitly that we are equally responsible for the health of non-Jews as we are for Jews. Similarly, the Shulchan Aruch (Yoreh Deah 336:1) explains that not only is it a mitzvah to heal the sick, but if health services are withheld, it is likened to the act of shedding blood. Beyond medical assistance, we are required by halakhah to provide necessary drugs and it is strictly forbidden to charge more than an appropriate price for medicine (Yoreh Deah 336:3). While this is undeniably an immense task, it is one that is demanded by Jewish law. However, upon whom specifically does this responsibility fall?

A brief glance at the great 20th-century Jewish legal authorities is enlightening. Rabbi Eliezer Waldenberg (Tzitz Eliezer 5:4) rules that the community must set up collective funds to ensure that all sick can receive necessary care and sustenance. Rabbi Shlomo Zalman Auerbach (Minkhat Shlomo v. 2, 86:4) further explains that the obligation actually may fall directly upon individual citizens to care for those in our communities. Rabbis Shlomo Goren and Chaim David Halevy, however, argue that the obligation is not a communal one; instead, it is incumbent upon the government to ensure that all citizens have access to adequate medical care. Rabbis Moshe Tendler, Yehudah Amital, and leaders of the Agudah have offered support for the needs of universal coverage.

Despite the various interpretations, what is clear from all sources is the exceptionally high priority Jewish law places on caring for the sick (Jew and gentile alike) and the call for collective responsibility. While the communal fund (kuppah) from which general Jewish needs were provided in prior times no longer exists, as American citizens, we are privileged to have access to the most powerful government in the world.

Whatever opinions we form about health-care reform, we need to take seriously the fact that the Torah has a clear approach - and we need to acknowledge to ourselves and to our communities when we bypass that approach. The consequences of ignoring the ethical values that emerge from our tradition are dire for many of our fellow citizens - Jews and non-Jews alike - where an estimated 16 percent of Americans (47 million) are uninsured.

Now is the time. The United States ranks 45th among nations in life expectancy; falling behind 44 other nations (including Iceland and Jordan) that offered some form of universal health coverage. The Institute of Medicine, which is federally chartered, has concluded that over 22,000 deaths are directly caused by the lack of proper health coverage and access to needed care. Additionally, the nation annually experiences around 750,000 bankruptcies in response to medical expenses not covered by insurance, leaving more than 2 million people - taking into consideration affected family members - tragically at a loss. And that was before the recession.

Now is the time for an Orthodox response to this crisis. In a country of such wealth, how has the United States allowed this situation to develop? In a time of historically unprecedented Jewish influence, how has this not been at the top of our community's agenda? Do the ancient values of Jewish law not speak to the contemporary crisis? By not acting, we ourselves become implicated. On health issues, the rabbis remind us of the biblical command: "Lo taamod al dam re'echa: Do not stand by the blood of thy neighbor!"