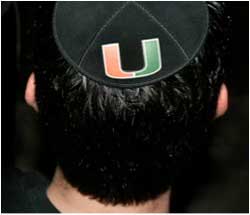 Last spring, nearly 200 University of California, Berkeley coeds danced in concentric circles to the Jewish folk tune at the Alpha Epsilon Pi (AEPi) house. The Jewish men's fraternity members were celebrating the fraternity-sponsored b'nai mitzvah of five members one day earlier -- something you wouldn't have witnessed years ago.

As the crowd clapped, several of the fraternity members lifted the chair of "bar mitzvah boy" Andrew Ratto, 22, parading him around the room in celebration of his Jewish transformation. "I went from a freshman whose only remote connection to Judaism was celebrating Chanukah to a senior who feels confident having a bar mitzvah and publicly declaring my commitment to Jewish adulthood," Ratto explains. "I owe that change entirely to Alpha Epsilon Pi."

At about the same time Ratto was being lifted in the air, some twenty Jewish students from Rutgers and George Washington University were constructing an irrigation system in El Salvador as part of an American Jewish World Service mission to help "repair the world."

At the University of Florida, several dozen coeds were engaged in "Torah on Tap," drinking beer (soda for those not yet twenty-one) at a popular Gainesville pizza joint and asking Rabbi Jonathan Siger (HUC-JIR class of 2002) to explain Jewish views on premarital sex and tattoos.

And at the University of Arizona, Jewish and Muslim students were co-drafting their own Middle East peace accords.

In the 21st century, it's a new world for Jews in college.

Ratto's personal journey, for one, is emblematic of a larger scale Jewish-style Greek revival on campus. A generation ago, Jewish coeds gravitated toward Jewish frats and sororities because anti-Semitic policies -- implicit or explicit -- kept them out of other houses, says Marianne Sanua, author of Jewish College Fraternities (2003). But once the landmark 1954 Supreme Court case Brown v. Board of Education struck down the notion of "separate but equal" educational facilities, Greek houses and other groups tied to educational institutions began removing sectarian clauses that had excluded Jews and other minorities. Suddenly Jews had more Greek options on campus -- and yet, just as the discrimination eased, the popularity of Greek life waned -- a response to the anti-establishment sentiments sweeping American campuses during the Vietnam War era.

A generation later, fraternities and sororities are back from the brink -- and Jewish houses are experiencing a renaissance. "We've seen more women interested in historically Jewish sororities," says Bonnie Wunsch, executive director of the Jewish-oriented sorority, Alpha Epsilon Phi, "and our strongest AEPhi chapters -- at the University of Texas, University of Florida, and Emory University, for example -- are those with strong Jewish identities." These frats and sororities are now organizing Shabbat and holiday meals, integrating kosher or kosher-style kitchens, planning trips to the Jewish state, and holding Israel events such as the joint AEPi and AEPhi-sponsored "Israel Amplified" advocacy seminar in Louisville, Kentucky, attended by eighty Jewish student leaders from across the country.