What Does It Mean to be Methodist? 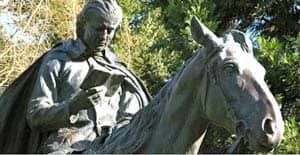 What does it mean to be Methodist?

Sounds like a trivial question fit for a lecture in a classroom and...  zzzzzz... maybe a nap, right?

In fact, right now it's a vital question for all people of faith -- partly because we all have a stake in rethinking the meaning of our traditional religious "brands" -- and, even more importantly, because historian John Wigger and Oxford University Press are dropping an amazing new book in our laps: American Saint: Francis Asbury & The Methodists. This carefully researched history explores this basic question in a mesmerizing way.

"Mesmerizing"? It's true! I couldn't put this book down! Why?

Francis Asbury was a genius of American cultural and organizational innovation. He was not a great preacher or writer, which is why there are no popular enduring works under his own byline. But what have you read lately from Bill Gates or Steve Jobs? They're not great writers either.

In Asbury's day- - at the very dawn of America -- men, women, and children flocked to see this man, much like people today might yearn to catch a personal glimpse of Bill Gates or Steve Jobs or even Oprah.

Under Asbury's leadership, Methodism went from near extinction in the American Revolution to becoming the biggest religious group in America in the years before the Civil War. It was a stunning accomplishment and its legacy helps to define America to this day, even though Methodists today have dwindled from their Microsoft-like dominance of the landscape.

What I'm writing here will come as a shock even to Methodists (most of whom are called United Methodists today) partly because -- as Wigger points out in his book -- Asbury didn't write his own autobiography. Instead, we've had more than a century of self-serving biographers painting Asbury for their own political purposes or, worse yet, tarring him with their own biases.

There was a time, for example, when Asbury was widely trashed by leading Methodists for being anti-intellectual. As the church rose in American prominence, many major figures in the church tarred Asbury for arguing that a seminary education wasn't necessary for preaching or for leadership. Asbury's critics said the stubborn old man celebrated ignorance and was a relic of the past.

Flash forward to 2009, when the most important spiritual voices in America have never attended seminary (people like Mitch Albom, Patrick McDonnell of "Mutts," Oprah herself, and so many others)! Suddenly, we can appreciate the genius in Asbury's message. Wigger points out that Asbury certainly was not anti-intellectual. He simply understood that, in America, effective preaching could come from every American, whether seminary trained or not. In 2009, that's now a bedrock truth in understanding American culture.

There was yet another era when Asbury was dismissed as a harsh guardian of American decency -- imagine an evil stepchild of Gen. George Patton and Miss Manners. But, that also was self-serving fiction, Wigger explains. That image was cooked up by Methodist leaders in the 1920s and handed down through families for several decades. In fact, Asbury could be strict in pursuing his work and his vision, but he was famous for his sense of humor!

Rescued from the rubbish of bad biographers by Wigger and Oxford, Asbury becomes a fascinating model for restless American spiritual pioneers today. He was a genius at rethinking church administration, and that genius rested on his own grassroots work with shockingly low overhead.

In effect, Asbury envisioned a church that was -- in effect -- an early Internet, as strange as that may sound. Because America lacked effective roads in the 1700s and early 1800s, Asbury became this Internet. He personally hit the road -- by horse with all the physical punishment that entails -- and covered 130,000 miles through America's trails, dirt tracks, and bumpy roads! Then he replicated his style of movement. He organized his church with thousands of Circuit Riders, each of whom typically rode 200 to 500 miles in month-long cycles of visiting about two dozen communities per pastor.