Why Do We Enjoy Professional Sports? 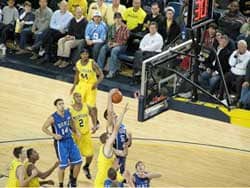 "March Madness" wound down and the winter-season sports drew to a close. But the poor sports fan has little respite... the warmer air means that America's Favorite Pastime is back, and teenagers who lack the ability to put together two numbers in math class will now effortlessly memorize numerous batting averages, RBIs, and ERAs.

The subject of sports fandom has long fascinated me; what is it about spectator sports that evokes such fanatic devotion from such a large segment of society? What causes otherwise sane adults to spend countless hours watching people they've never met -- people they probably wouldn't want to meet -- compete against each other?

A modicum of thought suffices to reveal that the standard explanations just don't hold water. For the average fan, sports are not about a profound appreciation of the precision, discipline, beauty, skill, and choreography displayed by talented athletes. If this were so, every fan would idolize the best athletes in the respective game, not the pathetic home team that often has less talent than the local Little League team. So you're thinking about "hometown pride"? That still doesn't explain why people idolize teams that have no local talent whatsoever. The only "local" part of the team is the city's name, which is embroidered on the uniform. Are we devotees of a wardrobe?

The most important team isn't the one playing on the field

Poking around the internet, I stumbled across some scholarly papers on the subject of sports fan psychology. Interestingly, it turns out that being an avid fan is not so much a desire to idolize a particular team as much as it is a subconscious desire to be part of a "fan community." A person has an innate need to be a part of a larger community, to share in the community's joys and triumphs as well as the misery of communal distress.

As it turns out, the most important team isn't the one playing on the field, but rather the larger team of fraternizing fans who feel real kinship with each other.

Even when we sit around a seder table, we mark the anniversary of the inception of the Jewish Team. We started out as the hottest team in the league, attracting a huge fan base. After sinking the Egyptian squad, we handily defeated the best athletes dispatched by the Amalekites and Midianites. The Canaanite lineup, too, didn't pose a serious threat to our status as undisputed world champions. It seems that the secret to our stellar record was our superb coaching. Ironically, our Coach actually invented the game in the first place, and knew how to bend some rules in our favor.

So many people applied to join our team, that at a certain point we stopped accepting applications. Conversions were temporarily discontinued. It was great to be a Jew!

Foolishly, we angered Coach and He sent us off to play on our own. All the other teams now took full advantage of the moment, relishing the ability to humiliate the erstwhile perennial champions. The Jewish Team lost its international fan base. In fact, it became cool for sports writers and fans alike to ridicule our team and encourage us to disband.

But for close to 2000 years we refused. Maybe our team wasn't winning championships, but it was our team. We shared the high moments, and we'll be darned if we don't stay loyal and stick together during the dry years. We'll commiserate together; we'll reminisce about the good old days; and we'll discuss our bright future that awaits us... because reliable sources report that Coach is planning on making a surprising reentry into the arena. Soon. Very soon.

This article was first published on Chabad.org and is reprinted with permission.

Rabbi Naftali Silberberg, a native of Detroit and a scholar renowned for his sharp wit and vast Talmudic knowledge, is on the editorial team of Chabad.org. He resides in Brooklyn, NY, with his wife Chaya Mushka and their three children.