Why I Still Love Halloween

From ghoulies and ghosties and long-legged beasties, And things that go bump in the night, Good lord, deliver us! -- A Scottish saying 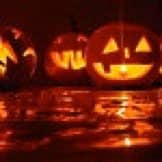 Baby boomers are a nostalgic bunch, and most of us can recall at least one costume we wore in grade school. Wearing yards of pink tulle and a homemade foil crown, I dressed up as Miss America when I was in the first grade in 1960. And who could forget trick-or-treating in packs until our pillowcases were too heavy to lug around the block?

While the holiday suffered a lull in the 1970s, the "season of the witch" now competes with Christmastime as the biggest party season of the year. And with all due respect to religious groups refusing to celebrate it, I never thought of Halloween as inherently evil.

In fact, I always felt a little sad for one of my son's grade-school pals, whose born-again Christian parents refused to let him wear a costume, attend Halloween parties, or go trick-or-treating with the neighborhood kids on Halloween night. While I respected the family's religious devotion, I disagreed with their conviction that the holiday's pre-Christian history was a threat to their faith. (I wanted to remind them that Christmas trees and Easter baskets also boasted pre-Christian, pagan origins. But I kept my mouth shut.)

British and Irish historians are also quick to remind us that "All Hallows Eve" did not originate as a gruesome night of devil worship -- though I'll be the first to admit that American retailers, film producers, and merchants who cash in on Halloween are guilty of adding their own mythology -- and gore. Regardless, in my view, what most of us seem to enjoy about the holiday is the creativity factor.

Stepping over age limits, Halloween extends an open invitation to play dress-up. It inspires us to raid attics and local thrift shops for the most outlandish outfits we can jumble together. If only for one magical night, it gives us permission to drop the dull disguise of conformity.

For flea-market junkies like me, Halloween is reason enough to hoard pieces of vintage clothing and jewelry that, by all rights, should have been donated to charity ages ago. My husband now refers to our attic as "the clothing museum," and with good reason. Friends who have trouble rustling up an outfit will often call for help during dress-up emergencies. ("Can I borrow one of your medieval jester hats for a clown costume?" is not an unusual request.) Over the years, in fact, I've collected so many crazy hats that we have to store them in a large steamer trunk behind the living room couch. Those hats get the most wear near Halloween, when even the most reserved engineer who visits will try on a pith helmet or a plumed pirate hat and wear it to the dinner table.

And why not? Historically speaking, the holiday has always been a celebration of the harvest, a madcap prelude to the more dignified ceremonials of Thanksgiving.

Halloween's deep roots weave back more than 2,000 years to the early Celts of Ireland, Scotland, and Wales. It was originally known as the festival of Samhain, according to Caitlin Matthews, a Celtic scholar and author of The Celtic Book of Days (Destiny Books). The festival, she explains, marked the end of the farming season and the beginning of the Celtic new year. Lavish banquet tables were prepared for the ancestors, who were believed to pierce the veil between the living and the dead on the eve of Samhain. It was also time to rekindle the bonfires that would sustain the clans in winter.

"In the Christian era," Matthews writes, "the festival was reassigned to the Feast of All Saints; however, many of the customs surrounding modern Halloween still concern this ancient understanding of the accessibility of the dead."

And we can thank our Irish immigrants for the jack-o'-lantern, which reputedly wards off evil spirits. This custom evolved from the old practice of carving out large turnips and squash, then illuminating them with candles. The term jack-o'-lantern was derived from a folk tale involving a crafty Irishman named Jack, who outwitted the Devil.

On cool October nights, when the moon is bright and leaves scatter nervously across the sidewalk, a bittersweet chill runs up and down my spine. I like to recall a favorite quote from Ray Bradbury, whose affection for Halloween surpasses even mine: "If you enjoy living, it is not difficult to keep the sense of mystery and wonder."