Will College Make You an Atheist? 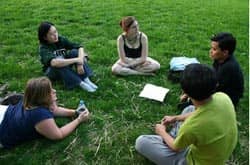 Like for Halloween and Christmas, the sales pitches arrive well before the actual event. Television, radio, newspapers, piles of merchandise in stores you visit, and blogs all announce: Back to School! For some it's kindergarten, for others, the very first day of college. School has begun. And that may mean losing your religion. And no, not the R.E.M. song. Nor, indeed, most of the definitions of the phrase out there -- losing your temper, giving up civility, or flying off the handle, for example -- though some people do see loss of religion and loss of morality or civility as entangled.

What do I mean? I mean losing your religion in a not-so-subtle way. I mean secularizing; closer to what the founders of losingmyreligion.com mean than, say, R.E.M. (what was Michael Stipe really singing about anyway?) And, this sort of fear of lost faith may be the reason that a recent study from the University of Michigan has elicited such attention across various news media. Can your choice of college major mean... losing your religion?

For many of those heading off to college, choosing a major is a critical step along the way to graduation. At some point, "undecided" is not enough; decisions are called for, choices, declaration of major forms. This whole process is sometimes thought of as peculiar to higher education in the United States, which is unlike other systems where college or university students know their area of specialization well before heading off to university. For U.S. students, declaring a major is a ritual almost as recognizably undergraduate as, say joining a fraternity, supporting sports teams or, these days, engaging in community service even when not forced to do so by the legal system. Indeed, there are books on choosing your major, Web sites filled with advice, and even quizzes to take online to figure out what major would be best for you.

Postmodernism as Gateway Drug to Atheism

And, now, there has been an explosion of reporting on choice of college major -- and religiosity -- in the higher education press and the blogosphere. Both the Chronicle of Higher Education and Inside Higher Education reported on the ways this ritualized choice may (or may not) relate to losing one's religion. In an article entitled "Connecting College Majors and Religion," Becky Supiano of the Chronicle drew on a paper entitled "Empirics on the Origins of Preferences: The Case of College Major and Religiosity," published by the National Bureau of Economic Research. Paper authors Miles Kimball, Colter M. Mitchell, Arland D. Thornton, and Linda C. Young-Demarco (all of the University of Michigan) investigated both the impact of major on religiosity and vice versa: the impact of religiosity on major. When Inside Higher Education took up the topic, their writers (or at least their headline writers) made the rhetorical leap from "religiosity" to "God."

Beyond the higher education press, the blogosphere erupted with responses ranging from simple re-postings to a response entitled "atheism is freedom." Not to be left out, the more traditional news media in the United States and beyond took up the topic as well; from Texas to India and back to New Hampshire, the notion that college major and religiosity are linked seemed to require attention. A lot of attention.

Of course, all this probably resulted from the well-executed press release issued by the University of Michigan, where the co-authors work. Here's how the press release opened: