A Bed of Thorns 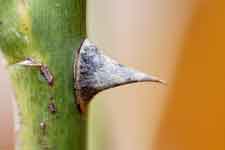 The seed that fell among the thorns represents others who hear God's word, but all too quickly the message is crowded out by the worries of this life, the lure of wealth, and the desire for other things, so no fruit is produced. (Mark 4:18-19)

In Mark 4, Jesus tells a series of parables that reveal something of the nature of the kingdom of God. The first of these parables is usually called The Parable of the Sower, though it might well be entitled The Parable of the Soils. It does feature a farmer who sows seeds. Yet the focus of the parable is not so much the act of sowing as on the various soils onto which the seeds are sown. On hard soil, rocky soil, and thorn-covered soil, the seed fails to flourish. But on the fertile soil, the seed grows abundantly, producing a lavish harvest. Jesus interprets this parable for his disciples. He explains the meaning of the different types of soils, which represent people who respond in various ways to the good news of the kingdom of God.

I am particularly drawn to the image of the seed falling among thorns. The thorns, according to Jesus, are "the worries of this life, the lure of wealth, and the desire for other things" that choke out the growth of the seed (4:19). Why am I drawn to this particular image? Partly, it reflects my pastoral experience over many years.

In my church in Irvine, for example, I had many members whose growth as Christians was stunted because they were so preoccupied with worries and wealth, to put it bluntly. They spent vast amounts of energy working, far beyond what was needed for a very comfortable life. And they fretted about many things, such as their physical appearance or their children's future.

But, to be fully honest, the image of the thorn-infested soil captures my attention because it depicts the tendency of my own discipleship. I can easily fill my consciousness with desires and concerns that drain my energy and attention away from the kingdom of God. Beneath the thorns that threaten the vitality of my faith there is fertile soil, because I truly wish to grow as a disciple of Jesus. But I must choose to prune back that which saps my strength and time so I can give the Lord my prime turf.

Questions for Reflection: Which of the soils best describes you? Or are you a combination of one or more of the soils? How might you become a more fertile soil for God's work?

Prayer: Dear Lord, thank you for the parable of the sower and the soils. I need this reminder today! Even though I've followed you for most of my life, I can still let the cares and desires of this world choke out our kingdom. I can give so much of myself to things that really don't matter. Forgive me, Lord, for being less than optimal soil.

I ask, Lord, that you'll help me to weed my garden, or to trim away that which limits the growth of your kingdom in my life. May I be fertile soil for the seed of the kingdom. And may the roots of your reign grow deeply into my heart, so that I might live my whole life for you.

I pray that, by your grace, I might not only be fertile soil for you, but also that your kingdom plant might flourish in my life. May I bear rich fruit for you, Lord! Amen.

Mark D. Roberts, as Senior Director and Scholar-in-Residence for Laity Lodge, is an advisor and frequent contributor to TheHighCalling.org. A Presbyterian pastor, Mark earned his Ph.D. in New Testament from Harvard University. He has written six books, including No Holds Barred: Wrestling with God in Prayer (WaterBrook, 2005). He blogs daily at www.markdroberts.com, and the meditations he writes for The High Calling will be featured here every Thursday, by permission of the author and the organization.