A Real Challenge to Marriage 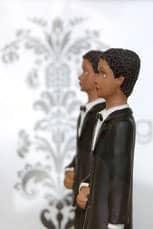 In the spring of 2007, my spouse and I sat dutifully in a diocesan-sponsored pre-Cana class as requested by the priest who would marry us in the summer.  An energetic and well-meaning couple led us through an activity meant to illustrate some of the many differences between men and women.

"Okay, who here always stops to ask for directions?"  My spouse raised his hand.

"And who keeps driving, convinced they'll figure it out?"  Up went my hand.

"Who likes to try new things when they go out to eat?" Him.

"And who always orders the same thing?"  Me.

As the activity went on, we noticed a pattern - apparently, I'm a stereotypical, stubborn guy while my spouse is the more thoughtful, emotional lady.  "Ten minutes in, and we've already failed at being married Catholics," I whispered to him as he tried to suppress a laugh.

In their forthcoming pastoral letter, "Marriage: Love and Life in the Divine Plan," the U.S. Conference of Catholic Bishops lay out the big three threats to modern Catholic marriage as they see it: cohabitation, contraception, and civil same-sex marriage.  In their objection to same-sex civil marriage, the bishops return again and again to male-female "complementarity" that is somehow "essential," as well as the "unique and proper place of husbands and wives."  This type of language reveals some very bizarre ideas about marriage - that a specific sexual act between a male and female is the most important aspect of a marital union, and that the nature of marriage is predicated on specific socialized gender roles.

The ongoing objection to same-sex marriage by the Catholic church seems to be predicated not only on the old procreation argument, but also on a stubborn attachment to specific gender roles, as evidenced by the reiteration of the validity of marriage of heterosexual couples who are unable to procreate. The trouble for the bishops is that while these gender roles are still prevalent, they are continuing to fall away.

In addition to biology, there is the "unique role" argument.  While the church in recent times, as well as in this document, has tried very hard to emphasize the equality of women in heterosexual marriages there is still a strong emphasis on a nebulous "difference" between wives and husbands.

To maintain the church's teaching on procreation as the basis for marriage, the burden falls disproportionately to women.  The time and labor required in childbearing from being perpetually "open to life" means that women's ability to participate in the workforce is greatly reduced, which impacts not only a woman's career aspirations, but also her lifetime economic security.

The women's liberation movement and the rise of gender studies have led to a greater acceptance of flexibility in gendered roles and expectations.  There is a greater expectation that women will work, men will be more involved with their children, and household duties will be more evenly shared (even if it doesn't quite pan out in reality).  In essence, straight couples are "queering" heterosexual marriage -- coming into the institution with radically different expectations than previous generations had.  If neither partner conforms to his or her "unique role," heterosexual marriage starts to look like its same-sex counterpart and illustrates that those "unique" gendered roles aren't as unique as the bishops claim they are.  If in a heterosexual marriage a man can provide nurturing and emotional sensitivity and a woman can provide leadership and effective decision-making skills, could they not bring these traits to a same-sex marriage?

The bishops also charge that allowing civil same-sex marriages will violate "the religious liberty of persons and institutions" and will negatively affect "religious freedom."  The irony, of course, is that the bishops are suggesting imposing a uniquely religious perspective on marriage as the law of the land, which will affect both the non-religious and those denominations and sects that recognize same-sex marriages. In reading the bishops' statements on civil same-sex marriage and witnessing such vocal opposition as Bishop Richard Malone's in Maine, it seems like they are attempting to impose a sacramental meaning onto a civil contract.

The strong language on the Church's objection to even civil same-sex marriage comes at a time when U.S. Catholics are becoming more and more supportive of marriage equality.  A report in July revealed that states with higher percentages of Catholic residents were more likely to support gay rights.  In the recent ballot initiative battle over same-sex marriage in Maine, a group of Catholics publicly aligned themselves against Bishop Malone by forming Catholics for Marriage Equality, a group opposed to repealing Maine's same-sex marriage law.