Maybe the water is in a large font on a pedestal or maybe it's just a small stoop attached to the wall, but either way the ritual is the same: you dip your fingers into the holy water and use them to make the sign of the cross. And you probably repeat the ritual as you glide back out the door at the end of the service, the holy water drying on your skin as you leave. Another small ritual of Catholic life.

That water has been used in ritual for about a zillion years probably isn't a surprise. After all, it's an integral part of life, the universal solvent, the largest surface component of our planet, and something that falls from the heavens on a regular basis, at least in many parts of the world. As the basis of most kinds of physical cleansing, it's a glaringly obvious symbol of spiritual cleansing as well.  A vast number of religions use water in some ritual form of cleansing or rebirth, including Judaism with its purification ritual of immersion in the mikvah and Christianity with its baptism. In fact, Christian baptism has a part to play in telling the history of holy water.

No one wants demon-infested water for their baptisms, right? So fairly early in the proceedings Christians began blessing the water that would be used for the ritual.  We first hear mention of this in the early 3rd century, and by about a century later we've got an actual written formula for performing the blessing of the water. It didn't take long, though, for holy water to move beyond its baptismal beginnings as belief in its curative powers began to take hold. Not hard to see why when you read stories like that of one Aphraates, a 4th-century bishop who saved the ailing favorite horse of the Emperor Valens by blessing some water with the sign of the cross and getting the horse to drink it. Holy water was really powerful stuff, and people would gather it in flasks to keep around their houses for cures, or to take to their fields as a blessing on the crops.

The Sprinkle of Blessing

In the 9th century, Pope Leo IV mandated that priests were to bless water and sprinkle the church-going folk with it before Mass. The rite came to be called asperges, after the first word in Latin of the selection from Psalm 51, which is spoken as the ritual is performed. The ritual is still in use to this day, although it tends to show up only at some particularly solemn Masses. You might have seen the priest or his helper toting around a bucket called an aspersory that holds the holy water and using an implement known as an aspergillum to fling the water out across the crowd; you may even have felt flecks of water falling across you. And in that moment, did you ever stop to wonder what made that particular fleck of water holy?

The short answer is that it had been blessed by a priest or bishop. The long answer would involve a historical rendering of how it wasn't always just priests or bishops doing the blessing. In fact, there were no clergy members involved in the first recorded Christian use of holy water: the apocryphal 2nd-century work known as the Acts of Peter tells of a Christian who is concerned about some bad mojo in his house, so he sprinkles water around it while invoking the name of Jesus. For many centuries Christians turned to lots of people they considered holy, clergy and non-clergy alike, to bless the water, but eventually this settled into a clerical function. 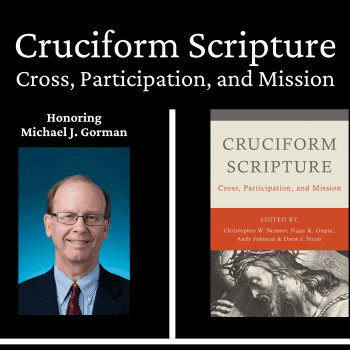 Cruciform Scripture: Essays in Honor of Michael J. Gorman (Release Day! Jan 5,...
Nijay Gupta
Get Patheos Newsletters
Get the latest from Patheos by signing up for our newsletters. Try our 3 most popular, or select from our huge collection of unique and thought-provoking newsletters.
From time to time you will also receive Special Offers from our partners that help us make this content free for you. You can opt out of these offers at any time.
see our full list of newsletters
Editor's picks See all columnists