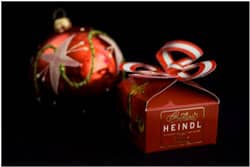 Thanksgiving puts a smile on the face of cranberry farmers, poultry farmers, sweet-potato farmers, and bookies. Valentine's Day gives the executives at Hallmark a warm fuzzy feeling. Come Mother's Day, florists are the happiest people in town, having jacked up their prices by orders of magnitude that would bring a federal suit down on any other industry. Easter is a holiday beloved of observant Christians -- but also of chocolatiers and confectioners and egg farmers, to say nothing of the evil trolls who manufacture the cellophane grass that lines environmentally unfriendly baskets.

But Christmas is the time when capitalism goes uncloaked, when alienation blossoms, when much of the world succumbs to a frenzied potlatch of one-upmanship, debt, and disappointment.

At this time of year, piety yields to commerce. The very title of Leigh Schmidt's book Consumer Rites: The Buying and Selling of American Holidays is a fitting thesis: the history of so many holidays is one in which popular festivals have become ritualized, contained by commerce, made into parodies of themselves. The process of hymn made into cash-register song has come to affect nearly everyone in the global market. The children of Buddhists clamor for Christmas presents; in Mexico and France, to the horror of purists, Halloween is rapidly displacing All Saints' Day.

It's no good resisting the trend, for history is against you. "The dynamic discourse of consumption has all along displayed a striking capacity to absorb the counterdiscourses of anticonsumerism, simplicity, and preservation," Schmidt remarks. Translated from academese, this means that, try as you will, the fires of holiday hell lick at the heels of even those who are pure of heart.

The origins of the secularized, cash-driven holidays are to be found in the early 19th-century American East, where a boom of industrialism and prosperity coincided with an influx of German immigrants who celebrated Christmas, rather than the New Year of the English. (A historical note: Bob Cratchit wasn't singled out to work late into the evening on December 24; most other Londoners did the same.)

Upholders of English tradition grumped that the transfer of the holidays to a date a week earlier would slow industrial productivity, inasmuch as workers used to New Year's festivities would celebrate them as well as Christmas, the lazy scalawags. The same opponents also complained that legislators would take the occasion to sneak a few extra days away from governing the country.

But Christmas prevailed, and with the new holiday came new trappings. In 1846 a Philadelphia merchant named William Maurice borrowed another German custom to install a "representation of old Kriss Kringle" in his emporium. Other merchants in other cities followed suit, offering their own versions of the magical peddler. It would take four more decades before they would settle on the standardized Santa Claus that we know today, whose image owes largely to the holiday cover paintings Thomas Nast drew for Harper's Weekly each year between 1863 and 1886, all rosy cheeks and bulbous nose.

It would take only a little longer for Santa Claus to displace Jesus Christ as the leading symbol of the holiday that, after all, was meant to commemorate Christ's birth. That displacement offended some, and the growing commodification of the holiday would provide a subject for debate and commentary for years to come. A character in the 1947 movie Miracle on 34th Street remarks to the department-store Santa played by the great Edmund Gwenn, "Yeah, there's a lot of bad isms floating around this world, but one of the worst is commercialism. Make a buck, make a buck. . . . Don't care what Christmas stands for. Just make a buck, make a buck." But merchants and manufacturers countered that it was no sin to make money from the holidays; indeed, those celebrations, a 1914 editorial in American Florist magazine opined, were "made possible only through the fact that money was made from them."