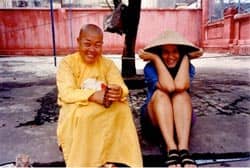 On a visit back to Vietnam, I stumbled on a Hindu temple that was nestled between some government buildings steps away from a Catholic cathedral and a Buddhist shrine. As I stepped through the entrance of the temple, a man smiled and welcomed me. He pointed to the various statues and pictures that adorned the small, neatly kept temple. He also told me that I was free to look and pray. This was the same welcome that I received when I entered several Buddhist shrines.

I was surprised and encouraged by the presence of these religious buildings in Vietnam, which had persecuted Buddhists and Catholics in 1954 when the country as divided between a "Communist North" and a "Democratic South."  The persecution of religious people continued in 1975 after the fall of Saigon (now Ho Chi Minh City). This atmosphere of persecution caused real tension and suspicions, some of which continues today. My encounter helped me to reflect more deeply on how these religions now thrive and interact in a country that had once denied religious expression.

My reflection on interreligious dialogue involves both understanding the formal approaches as expressed by theologians and scholars but also by paying close attention to everyday people. I find efforts are made in both areas to seriously engage religions in honest discussion and understanding. The challenges are many but the desire to learn and to dialogue are encouraging.

A major component of dialogue that is helpful to embrace is the practice of hospitality. The interreligious relations in our early 21st-century need hospitality, especially when the crossing of borders usually results in an encounter with someone of a different faith. For Catholics, the mandate to be hospitable is emphasized in a letter by Pope John Paul II, who wrote:

A stranger is no longer a stranger for the person who must become a neighbor to someone in need, to the point of accepting responsibility for his life, as the parable of the Good Samaritan shows so clearly. Even an enemy ceases to be an enemy for the person who is obliged to love him, to "do good" to him and respond to his immediate needs promptly and with no expectation of repayment. (JP II, The Gospel Life (Evangelium Vitae)

The practice of hospitality is not just an ideal but must be acted out on the level of the individual and the Church community. In order to create a hospitable environment, the identities of the host and the guest cannot be blurred. They must always be able to maintain who they are and where they came from. Thus, a guest should not be forced into any sort of naïve syncretism of the host's preferred religion or beliefs. The host is bound to the guest resulting in the fact that both host and guest need to be welcoming, available, and responsible for one another.

This is my experience on my visit to Vietnam. I found that people did not care what religion I practiced. The people were first welcoming, then took time to be available and responsibly helped me to understand their particular situations.

Hospitality is not just practiced on the individual level but also needs to be realized at the ecclesial level. An ecclesial hospitality is shaped by the fact that the Church must continue to maintain and expand its ministries to people of any religious tradition who are in most need of assistance. The Church has developed through the ages and still maintains the attitude, in some respect, that she is no longer merely a guest but host to others. The Church, however, cannot receive religious others in exactly the same way as Christians receive other Christians - or else the differences between religious traditions will be ignored. Christians do not corner the market on hospitality, and an interreligious dialogue based on hospitality comes alive when religions embrace the roles of hosts and guests.

Hospitality is an initial step in interreligious dialogue. It is necessary in Vietnam and other parts of Asia where persecution and suspicion have shattered human relationships. Religions are similar in the way they help people build human relationships but they are also genuinely unique, making them different from one another. The first step to encountering the difference is to welcome the other in warm hospitality.

Linh Hoang, OFM is an Assistant Professor of Religious Studies at Siena College, specializing in Catholic dialogue with other religions