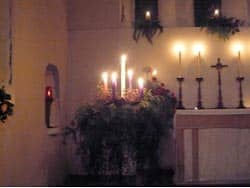 People need holidays, a break from the routine of everyday life. The ancient Babylonians, Romans, Greeks, Native Americans, and pretty much everyone else knew this: they celebrated days that gave meaning to their beliefs and provided a respite from the hunting and gathering and herding and plowing that made up most days. The Catholic Church understood this, often adapting the celebrations of other cultures and giving them a Christian spin. In the 7th century Pope Gregory I sent a missionary named Mellitus out to what is now England with instructions to recast the holy days of the heathens into Christ-centered celebrations on the grounds that they would be more easily converted if they knew they did not have to give up their holidays. It may have been cultural imperialism, but it was effective.

Catholics start their liturgical year on the first Sunday of Advent, which is November 30 this year (you didn't know to expect a Happy New Year in November, did you?). I love the season of Advent, which is a time of promise and anticipation, of expectant waiting for the presence of God among us. Advent has its own set of preparations and rituals. Many families make advent wreaths, a circle of four candles surrounded by greenery or other decoration, and perform a ritual lighting of one candle each night the first week and an additional candle for each succeeding week. In this way they bring the Advent sense of holy waiting into their daily lives.

Christmas marks the end of Advent, an event that many Catholics celebrate at the very moment of its arrival by attending Midnight Mass on December 24/25. Imagine the church, the worshippers in the pews waiting expectantly, each holding an unlit candle. Darkness falls upon the room and a hush across the crowd. The celebrants enter bearing a lit candle that they use to light a small group of others; these in turn are used to light other candles until everyone is holding a small flame. Catholics see in this beautiful ritual a symbolic representation of the coming of Christ: the one flame is ultimately the source of the sea of other flames now shining around the room, just as Christ came into the darkness of a world searching for God and lit the flame that now shines in all lands.

Traditionally, Christmas Day is only the beginning of the Christmas season. You know the 12 Days of Christmas? Despite what retailers and manufacturers tell you, those days actually stretch from Christmas Day until January 5th. The next day, January 6, is the Feast of the Epiphany, which is a two-for-one holiday in Catholicism: it celebrates the coming of the Magi bearing their gifts to the Christ Child as well as Jesus' baptism in the River Jordan by John the Baptizer. This actually makes some sense liturgically: both are moments when God's love embodied in Jesus is recognized by others.

That love is what these holidays are about, ultimately. Throughout the Advent and Christmas season, gifts are given, parties are attended, eggnog is drunk, trees are decorated; the standard Western materialistic take on Christmas is fully at work.

But the Church calls Catholics to remember that this is not what these seasons are about, that in fact this sort of materialism is not what any holy day is about. I said before that people need holidays, but they also need holy days: not just a break from doing the everyday things, but a break from thinking in the everyday ways. A reminder that the sacred exists right here in the midst of the profane. The Church dedicates every single day of the year to at least one saint or special feast; every day, the Church says, we remember something wondrous that occurred in the past and know that something wondrous is taking place here in our present. Every day is a holy day.

Cynthia Stewart, a regular contributor to Patheos, has taught courses in the history of Christian thought, theology, philosophy, and medieval studies. She is the author of The Catholic Church: A Brief Popular History (St. Mary's Press, 2008).