Interfaith Dialogue as a Struggle for Identity 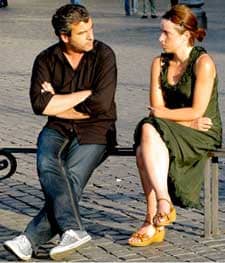 With all the fuss that is made over words like "diversity," "outreach," and "ecumenism," it is sometimes easy to forget that, well... we don't really have to talk to each other. In fact, most of us don't talk to each other -- at least about the things that matter most to us. Conversations around the water cooler at work tend to stick to a safer neutral ground of sports, TV shows, trivial gossip, and maybe (if we're feeling adventurous) politics. But religion -- which arguably matters far more than any of these topics -- is studiously avoided. When it comes to God, it seems most of us would rather not talk about it.

I suppose this makes me -- someone who deliberately seeks out opportunities for interfaith dialogue and debate -- a bit of freak. As a lifelong practicing member of the Church of Jesus Christ of Latter-day Saints (commonly referred to as "LDS" or "Mormons"), I have spent the last three years in constant online interaction with those of other faiths (or even no faith) whenever Mormonism is a topic. These interactions have ranged from polite inquiry to impassioned argument, and have covered a wide range of faiths and people. I probably see more religious conflict in one week of my life than most of my fellow LDS care to receive in half a year of their lives. I get a lot of raised eyebrows when my fellow Mormons learn what I've been up to. "Why go looking for trouble?" they seem to be silently asking. Indeed, I find myself also asking why I submit myself constantly to a form of interaction that can be so extremely punishing on one's own faith and beliefs.

I certainly don't think I learned it at Church. To grow up Mormon in Utah is to gain an almost instinctive dislike of conflict. After all, "contention is of the devil." The prevailing view in my childhood communities seemed to be that arguments were nothing more than roadblocks for getting things done. If I grew up an argumentative person, I can't really blame it on my religious culture.

I think I got my first hint of why an argument can be a good thing at age 20 -- halfway into my two-year service as a missionary in southern Japan. Missionaries tended to get a lot of cold looks from other Westerners visiting Japan. Some of them even went so far as to scold us -- "why can't you just leave these people alone?"

I didn't have much of an answer to the reprimands. But I also couldn't help noticing that struggling against Japanese culture on a daily basis, and using the language for more than just finding the restroom and going shopping, had given me knowledge of the country far superior to most of the European tourists I encountered. In some ways, we know our opponents far better than we know our casual acquaintances. This isn't to say that we didn't try to be polite and respectful about it. But I learned that you sometimes learn far more about someone else from sincere confrontation than from pointedly ignoring each other and calling it "tolerance."

So the initial conclusion I drew from my mission was that sincere confrontation was the best way to learn about other people and systems of belief. This conclusion stayed with me throughout college, and into my first forays into the world of online religious debate. Online, I found the perfect forum to confront other ideas and provide as the apostle Paul put it "reasons for my faith." I thought I was doing it for the sheer knowledge of other faiths I was gaining.

Article Continued On Next Page
Page: 1 of 2
11/6/2009 5:00:00 AM
About Kevin Juhasz
Kevin Juhasz is a content manager with a Colorado-based marketing company and the owner of The Write Content, which provides writing and editing services. He has more than 25 years of writing and editing experience with websites, newspapers, magazines, trade publications and more. Kevin has covered news, sports, entertainment, technology and a wide variety of other subjects.