Is Greed So Bad? 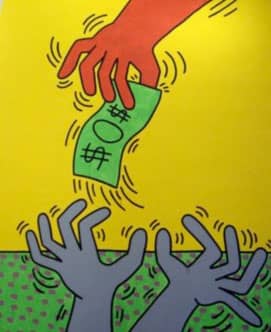 It is easy to give greed a bad rap. Greed has to do with excess and self-indulgence. It looks like a very obvious vice. As we have come to terms with the dramatic economic decline, 'greed' has been blamed. Almost anyone involved in the financial sector (from mortgages to investments) has been characterized as 'greedy'. Greed is the big sin of capitalism, which, according to this worldview, is responsible for the mess we are currently in.

Before we get carried away with this denunciation of greed, we need to pause and allow ourselves to become a little more nuanced. In a world where there is no greed, there would be no desire. A major motivating force for self-improvement would disappear. People innovate, work hard, and pioneer because they want to be a little more comfortable, to have the larger home, to enjoy an IPod and fine wine.

In fact, cases of blatant greed are fairly rare. Those involved in the sub-prime mortgage debacle were more guilty of stupidity than greed. It was stupid to assume that the housing market values in the United States were going to increase at the same dramatic rate; this was not greedy, but stupid. Granted, some greed might be reflected in the desire for a commission by an individual mortgage consultant, but this is a relatively minor factor. Those who invested in Bernard Madoff's Ponzi scheme were not necessarily greedy. The charities that had invested with Madoff wanted to get the best possible return so they could give more away: it is an odd sort of greed that culminates in philanthropy.

The truth is that we are made by God to seek to improve our lot by labor. Any thoughtful account of human agency in this world must recognize that this world requires an aspiration to succeed. Nothing comes easily. We need to toil on the land for food; we need to build if we want shelter. The basics require motivation; and this basic motivation is an aspiration for anything beyond being a nomadic scavenger. We don't survive unless we have some ‘greedy' desire.

In other words Michael Novak in The Spirit of Democratic Capitalism and Richard John Neuhaus in Doing Well and Doing Good had it right. Part of the Image of God is a capacity to create, to work hard, and to succeed. In other words, a basic greedy aspiration is not part of the Fall, but part of the Imago Dei.

Naturally, there does come a point where greed can be destructive. To be a two-car family can be a necessity in modern America, to own sixteen is a wicked misuse of resources. To live life to accumulate more wealth than one can enjoy is sin. Part of the joy of being rewarded appropriately for one's labor is the opportunity to give to others. One should be greedy for both oneself and others.

This is Aristotle's insight. For Aristotle in The Nicomachean Ethics, greed is contrasted with generosity. Generosity, argued Aristotle, is the mean between wastefulness and greed. The desire for things is not wrong, but the desire to keep all these things for oneself is. But once this is seen, we can now see why this constant critique that the economic crisis is 'all due to too much greed' is so mistaken. If this were the case, then the failure of the investment bankers and mortgage consultants would be the lack of generosity. But this wasn't the problem. Stupidity was the problem. What we need now is for an intelligent propensity to greed, which has generous outcomes. Living in this world is living in a way that God always intended us to live.

Ian S. Markham is Dean and President of Virginia Theological Seminary and is the author and editor of numerous books including: A Theology of Engagement; Truth and the Reality of God; Do Morals Matter; Understanding Christian Doctrineand most recently, Liturgical Life Principles: How Episcopal Worship Can Lead to Healthy and Authentic Living. He currently serves as Priest Associate at St. Paul's Church in Alexandria.Dean Markham is married to Lesley Markham and they have one son, Luke.