A Month of Holidays 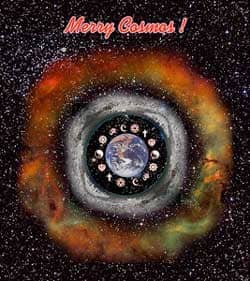 Christmas is one of the biggest holidays in America. It is an anticipated religious holiday, an incredible shopping time, and arguably one of the biggest civil holidays we have. The importance of the holiday in American public life is believed to have increased the importance of Hanukah for the American Jewish community, as it generally falls around the same time as Christmas and offers a visible alternative to the Christmas holiday.

What happens to other religious faiths? Do we need to create our own Yuletide seasonal holidays? It's a great question, and one I don't want to deal with. It's too hard. I want to talk about what I, as a Muslim, know about this season.

As important a holiday as Christmas is, I actually didn't know about it quite late in my childhood. I grew up in a majority Jewish neighborhood, so Hanukah was the holiday of choice. The Christmas tree that was always with the menorah seemed to be a nice background to make the menorah stand out. The Santa figure was a shamash to keep the menorah safe, and he sometimes had an assistant in the snowman. I played dreidel with my friends, although I never understood the song. My dreidels were always made of plastic, and I saw metal ones, but never clay. I got my gelt for the holidays, and waited all year to get my latkes.

Of course, once I learned of Christmas, it was a very cool holiday. You could ask for what you wanted. While gelt was cool, if it wasn't real gelt, not much you could do with it. It was never discouraged in my house. Jesus (Isa) is a recognized prophet in the Islamic tradition. We celebrate the birth of Prophet Muhammad and Ali ibn Ali Talib, the Prophet's cousin and son-in-law. To celebrate the birth of another major figure, especially a prophet, did not seem like a big deal.

More importantly, I had my own holiday. I am a Nizari Isma'ili Muslim. That means I belong to the Shi'ah community that has a present, living Imam in the Aga Khan. His birthday falls on December 13th and is an important for us to recognize the Divine command that established Imamah amongst the Muslim community. As a result, December was always all holiday in my house.

This is a special time that I spend in fervent and joyous prayers. Playing games with my friends -- I'm working on teaching my kids dreidel now. And of course, a time to have the big family dinner; the public holiday that we all get off. Of course, no Christmas dinner is complete without latkes. It is the most wonderful time of the year.

Hussein Rashid is a native New Yorker and proud Muslim. After finishing his undergraduate degree at Columbia University, he completed a Master's in Theology at Harvard where he is now finishing his Ph.D. in Islamic Cultures. He works with major political figures and institutions, advising them on the history and culture of Muslims.