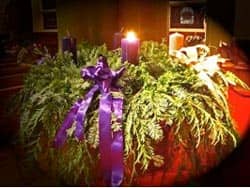 Next Sunday, Nov. 29th, is the First Sunday of Advent and the first Sunday of the new liturgical year. The Sunday readings will be taken from Cycle C featuring the Gospel of Luke, and the daily Mass readings from Year 2.

Unlike Lent whose number of days is fixed at forty, Advent does not have a fixed number of days. Rather, it has a fixed number of Sundays.  Advent must have four Sundays, but the number of days varies depending on the day of the week on which Christmas falls.  A good visual aid for the season of Advent is the Advent wreath. If used liturgically, it should be placed in the narthex or gathering area of the church, or near the ambo, or ideally, hung over the assembly. The candles might be borne in procession following the cross or just ahead of the Book of the Gospels. See the Book of Blessings for "Blessing of the Advent Wreath," #1509-1540.

The season of Advent focuses on  preparing for the three "comings" of Christ: Christ who came once for all in history at Bethlehem, Christ who will come again at the end of time as judge and ruler, and Christ who comes now in the present, in our lives, and as our food for the journey in the Eucharist.  The season of Advent is divided into two parts: from the first Sunday of Advent until the 17th of December, when the Church's liturgy focuses primarily on being watchful and ready for  the second coming of Christ in glory, and in his present coming in our world, and then from the 17th of December until the Christmas Eve Masses, when the Church's liturgy focuses on getting ready for the  first coming of Christ at Bethlehem, which we recall at Christmas. It is most appropriate to refrain from using the O antiphons (on which "O Come, O Come Emmanuel") is based until the second part of the season of Advent, from December 17-24th, since each of the verses of "O Come O Come Emmanuel" is one of the antiphons from Evening Prayer for each of those seven days.