Respect is a Two-Way Street 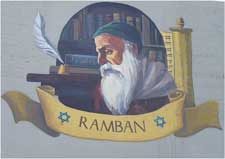 In 1263, the great Spanish scholar Rabbi Moses ben Nahman, better known as Nahmanides, was summoned to Barcelona by King James I of Aragon to engage in a rather stressful form of interfaith dialogue with representatives of the Dominican and Franciscan religious orders.

Their debate is known to history as the Disputation of Barcelona. The purpose of those who initiated the event (principally, an apostate Jew) was to compel the conversion of Spanish Jewry to Christianity. Guaranteed freedom of speech, Nahmanides, the sole Jewish representative in the proceedings, gave as good as he got in a free-wheeling medieval rhetorical brawl, in which both sides made it clear how little they thought of their opponents' faith.

Though given a reward by the king for his performance, Nahmanides was eventually forced to flee the country because of the church's anger. In particular, Pope Clement IV sought to punish the rabbi for his courageous defense of Judaism.

Flash forward 745 years, and some of the lessons of the Disputation still stand. Public arguments about matters of faith can be a dangerous game whose outcome often serves the purposes of those who wish to spread intolerance rather than knowledge.

Though the context of the present day couldn't be any more different than the circumstances of 1263 Barcelona, many Jews appear to be thinking about interfaith relations with this piece of sad history still in mind.

The latest irritant in Catholic-Jewish relations is the result of the church's revival of an Easter Week devotion in which believers are asked to pray for the conversion of the Jews.

As part of an effort to break down divisions within Catholicism that had grown up around the abandonment of the Latin Mass, Pope Benedict XVI allowed the saying of the Tridentine rite. The prayer, which was dropped by the Second Vatican Council in the 1960s, spoke of Jewish "blindness" and asked the Almighty to "remove the veil from their hearts."

Shocked by this reversion to language that was part of a long history of the teaching of contempt for Judaism, Jewish leaders asked the Vatican to reconsider the move. The Vatican responded by issuing a new version of the prayer that eliminated the lines about "blindness" and the "veil" over Jewish hearts, but did not omit the call for conversion.

The Jewish reaction to this move was anguished. The Anti-Defamation League wrote a letter to the pope asking that he further amend the prayer. The Conservative, Reform, and Reconstructionist movements are all expected to add their pleas soon.

In response, Cardinal Walter Kasper seemed to express bewilderment at the sensitivity of the Jews. He told the Italian newspaper Corriere della Sera, "I don't understand why Jews cannot accept that we can make use of our freedom to formulate our papers." His point was that the prayer "reflects the faith of the church, and furthermore Jews have prayers in their liturgical texts that we Catholics don't like ... one must respect differences."

While the cardinal's statement illustrates the slippery slope down which this sort of dispute can soon lead to hurt feelings on all sides, he is, of course, right. Catholics are free to believe whatever they want about the universal truth of the doctrines of their faith. The same right must also apply to everyone else when it comes to their opinions about their own religions and everyone else's. Problems arise not from believing these different things, but how we act on those differences.

On that score, it is important for Jews to understand that the Catholic Church has, in recent generations, moved light years away from the spirit of the Disputation of Barcelona. Under the inspired leadership of Pope John XXIII and later Pope John Paul II, the Vatican discarded the teaching of contempt for Judaism, and introduced new curricula in their schools and churches based on respect for Judaism and recognition of past persecutions.

As for proselytizing, unlike many Protestant denominations, the church has dropped campaigns to specifically target Jews for conversion.

Yet Jewish groups still fear that if the Vatican, in seeking to mollify its own liturgical conservative wing, moves away from the spirit of Vatican II, it will mean that Catholics no longer embrace John Paul II's beliefs that taught Catholics to think of Jews as their theological older brothers whose legitimacy should not be questioned.