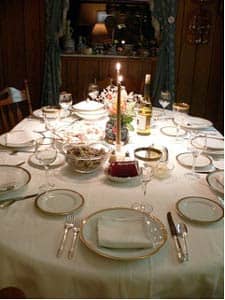 Public holidays are a vestige of a religious world, but point to the beauty to be discovered in the re-engagement with such a world.

Consider Thanksgiving, that most U.S. American of holidays: family, feast, football.  It is at once a look back to a moment in history (however idealized); an appreciation of the contemporary moment, in which we are called to remember our loved ones; a long weekend in which we can just kick back and relax.

The historical picture, of course, is complex.  I live not far from Plymouth, Massachusetts, where English settlers began the Massachusetts Bay colony.  In recent years, native groups have challenged the Thanksgiving story with the "Day of Mourning," illustrating, in part, that community celebrations are more about telling a certain kind of story than about excruciating attention to detail -- not unlike many religious celebrations.  They tell a story, but also remind us that there are other stories embedded in the story we remember.

Like many religious celebrations, the Thanksgiving holiday is about joining with loved ones around a ritual meal.  (If we were Greek, we'd use the word for "thanksgiving," eucharisto.)

(I'll refrain from the temptation of comparing football to a ritual reenactment of war, or the release of male aggression, or something like that.)

What I will emphasize, though, is that the most interesting element of public holidays -- and what reminds me of religious holidays -- is that they operate in a kind of "sacred time," a time set apart from the normal tick-tock of daily life.  Most of us can put down the Blackberries for a while during dinner, and we'll reminisce about Thanksgivings past.  The historically-minded among us will recall pilgrims and a long sea voyage, culminating in relief and fear upon a foreign shore.  The philosophically minded may consider whether European incursion upon that shore marked the beginning of unjust colonization and exploitation of native peoples.  The religiously minded will recall how important it is for all people to render thanks, while the socially minded will relish the goodness of gathering family from around town or around the country for yet one more opportunity to just be together.

Sacred time -- past, present, and future gathered into the marking of the days.  Thanksgiving is not just a Thursday or a long weekend; it's a marker of a family's life.

Charles Taylor observes in A Secular Age that a key difference between 1500 and 2000 is that today we have in large part lost sacred time.  Religious calendars are not like other calendars -- an irony, to be sure, since our current (Western) calendar came from the Church.  Today, a year is fifty work weeks and two vacation weeks.  Sure, there is the occasional Thanksgiving or Fourth of July; but the others -- like Christmas -- are just too contentious to serve as truly "national" sacred time.

Taylor asks, in contrast, how, in 1500, Catholics could perceive Good Friday as being closer to Christ's death than the average summer day of the year before. He is, of course, well aware that in marking holidays -- sacred feasts, sacred fasts, sacred time -- we enter into an imaginary participation in those past events that continue to shape our identity as a people.  Jews celebrating the seder know this; Catholics celebrating Good Friday know this.

For me, holy days are ways of giving shape to the saeculum ("age"), the "secular" world, of recalling and re-living the past in order to mine its meaning for the future.  Without its memories, what would a family, or a nation, or a faith community...or a world... be?

Tim Muldoon is a Catholic theologian, author, speaker, and retreat leader specializing in the ways that Church traditions speak to contemporary life. He has written extensively on the themes of young adult spirituality, Ignatian spirituality, theology in postmodernity, sexuality and marriage, and adoption issues, and is a frequent contributor to Patheos.