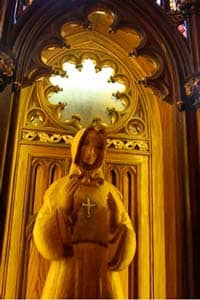 My Presbyterian friend Susan and I had spent the evening at some sort of lecture in Harvard Divinity School's Andover Hall.  She walked me to my bike at the bike rack as we meandered through questions about why we were in a masters in theological studies program, what we thought we wanted to do with the degree, what sorts of inner callings brought us to Cambridge, Massachusetts.

Slowly, the questions turned to vocational ones and Susan wondered aloud about her own possibilities for ordination, wondered if she ought to think more seriously about being a minister in the Presbyterian community.

We had long ago arrived at my bike as I listened to Susan think about her callings, wonder about her place in her religious community.  She spoke rather eloquently about her appreciation for things Presbyterian and seemed earnest in her discernment about being a minister.

As our conversation wound down and we began to part ways, I was all of a sudden struck by how different this conversation about vocation was than the ones I have had with my Catholic friends.  For Susan, the possibility of ordination is real and tangible; one of the many directions her master's degree might lead.  And as I talked with Susan, I understood that; it didn't seem strange to me that a friend might consider ordination. But something felt odd.  Later, I realized, what felt odd was that this was a female friend of mine, an academic colleague, someone with whom I tried to digest feminist theology and work through philosophies of love and justice.  And of the options on her proverbial table lies ordination.

The tenor with my female Catholic friends is, of course, I realized, strikingly different.  If ordination comes up at all, it is clothed in sadness, anger, frustration, lost opportunity, shame.  We do not speak of it with the openness Susan (and many other young women at Harvard Divinity School) does; we do not consider it freely, without disconcerting consequence.

Before I went to Harvard, I had been in Catholic college, Catholic grade school, and Catholic youth group in high school.  The Protestants and non-Christians I had known before Harvard came to me through Catholic venues; they entered my Catholic world.  At Harvard, my Catholic self traveled outside Catholic worlds.

Being in an intentionally interreligious educational environment taught me many wonderful things.  But it also shed new light on the ways my Catholic world imbued my sensibilities, shaped my assumptions...and made it seem odd to think about women's ordination as a real option.

One of the things Jen and I write about in our introduction to From the Pews in the Back: Young Women & Catholicism is how Catholic identity bumps up to our non-Catholic life.  It's a pluralistic world; what does that mean for our religious identities? How does being in interfaith settings affect our own understandings of the world?  In what ways can we be challenged in these settings?

Kate Dugan is a co-editor ofFrom the Pews in the Back and a doctoral student in religion at Northwestern University in Evanston, IL.