The Book of Genesis -- Illustrated 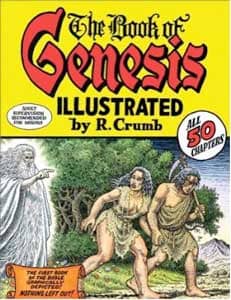 Today I made a pilgrimage to the Hammer Museum in Los Angeles to witness the exhibition of Robert Crumb's illustrations of the entire book of Genesis.  Crumb, that iconic cartoonist of the counterculture era, stumbled into this enormous undertaking over a period of many years.  In the end, he made it a straight cartoon illustration project, without the kind of humor and exaggeration one might have expected from him.  The display at the Hammer Museum shows over 200 frames, which include every word of Genesis.  The whole work is available in hardback book form as The Book of Genesis Illustrated by R. Crumb (Norton, 2009).

Crumb spent a great deal of time researching the text, studying images from the Near East and from previous cartoon and film portrayals of the Genesis stories, and consulting with scholars.  The result is a blend of familiar biblical imagery with Crumb's uniquely earthy and visceral depictions.  God is a magnificently stern figure, effulgent with impossibly long, white head and face hair: the classical anthropomorphic figure of the divine.  Just what one might expect from an old-fashioned illustrated Bible storybook.  But for every cliché, a dozen astounding creative leaps are displayed.

Only R. Crumb could depict the genealogical recitations of Genesis 35 and 36 in such an intensely vivid, gritty, idiosyncratic manner.  Each named character is depicted as a cartoon image of what could have been the person's real face.  They aren't idealized.  They are ruggedly distinct from each other in their expressions.  More than anything else about Crumb's "Genesis," it is the richly unique facial features of each character that leap off the page and remind the viewer that Genesis is a book about a long line of unique personalities -- including the imagined Godhead -- each with particular proclivities, weaknesses, and strengths.  The unreal medium of the cartoon, in Crumb's skillful hand, makes the story seem more real than I've ever seen it depicted.  I was amazed at my own strong emotional reaction to the images, an effect heightened by the sheer number of images displayed on wall after wall of the museum.

Indeed, little is left out of the depictions.  Sweat, dirt, blood, dust, and smoke are so carefully drawn that the viewer is almost as able to smell the scenes as to see them.  The stony landscape of Palestine is depicted in grainy detail.  Women's nipples show through their garments.  The pores on men's noses are dotted in with Crumb's pen.  When the text says, "he lay with her," the cartoons show exactly what that means.  It's as far from the aesthetic of a Sunday School play, with costumes washed in Tide and dried with Bounce, as one can get.

In his hand-written introduction, he says, "I ...do not believe the Bible is the ‘Word of God'.  I believe it is the words of men."  But he goes on to say that when the Hebrew Bible was compiled in its final form, "the stories of this people, the Hebrews, were then something more than just stories."  Something of the divine emerged from the book of Genesis through its recitation and writing.  Likewise, a new manifestation of divinity emerges in the way that Robert Crumb visualizes the words of the text.  The human potential for transcendence is vividly portrayed in the combination of the words and the artwork.  His cartooning reminds us that the characters of Genesis, like us all, are made, in the words of the Psalmist, "little less than God" (Psalm 8: 5).   Just as he beautifully depicts God giving the breath of life to Adam, Crumb's art oxygenates the whole book of Genesis.  And with this work, R. Crumb himself rises above the limitations of his reputation for sexual, satirical, and psychedelic imagery.  It's a breathtaking, and breath-giving, project -- for him, and for the beholder.

This article is reprinted with permission from Jim Burklo's blog, Musings, at The Center for Progressive Christianity.

Jim Burklo is an ordained United Church of Christ pastor who serves as the Associate Dean of Religious Life at the University of Southern California. He is the author ofBirdlike and Barnless: Meditations, Prayers, and Songs for Progressive Christians (2008) and Open Christianity: Home By Another Road (2000). He served as pastor of Sausalito (CA) Presbyterian Church, and of College Heights UCC Church in San Mateo, CA, served as ecumenical Protestant campus minister at Stanford University, and was the founder and executive director of the interfaith Urban Ministry of Palo Alto. His Masters of Divinity degree is from San Francisco Theological Seminary. Jim regularly blogs at The Center for Progressive Christianity (www.tcpc.org).