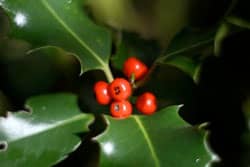 The original reason for the season is the Winter Solstice. Solstice is a word from the Latin that meaning "stands still." For six days at this time, the sun appears to stand still on the horizon. This was a time of uncertainty and mystery as people wondered if indeed the sun would return. When it did year and year again, festivals grew up in just about every place and culture. Even today in our modern indoor society the Solstice continues to be a time of celebration across the world. The theme of light emerging from darkness is universal at this time of year.

In primitive societies the priests and shamans were most certainly the astronomers. Knowledge of the mathematical calculations needed to calculate the time of the Solstices would be seen as high magic in these cultures. From New Grange in Ireland to Chaco Canyon in New Mexico, to the great solar temples of Egypt, peoples developed elaborate sacred sites to track the movement of the Sun across the sky and to note the times of the Solstices. Stonehenge is the most famous of the solar calculators and its construction is one of the great, unsolved mysteries.

The celebration of Horus or Ra the Sun in ancient Egypt involved decorating with greenery, especially palm branches with twelve fronds, and directly linked the Sun God to the natural rhythms of the sun in the sky.

The Solstice time in Babylon was Zagmuk. The Babylonians incorporated their Sun god Marduk who defeated the Monsters of Chaos during this dark and shadowy time. This holiday introduced the idea of the struggle between good and bad; continued today in the magical persona of a Santa Claus who uses the granting of presents or coal and switches to judge children.

The festival of Sacaea continued this theme. The Persians and later the Greeks celebrated the reversal of order that was stirred up by Kallikantzaroi, mischievous imps who roamed about during the twelve days of Sacaea. These imps had a darker side than the elves that Santa associates with today.

In Rome the major festival for this time of year was Saturnalia, the birthday of the Roman God Saturn. This festival was celebrated from December 17-24. This holiday included pig sacrifice and gift exchange and was followed by the Kalends, an early January celebration of the New Year where houses were decorated with greenery and lights, both of which are usually still up on New Year's Day in modern America.

The Norse, largely independently, arrived at a similar holiday that bears the closest resemblance to the modern celebrations and, unlike the Celts and many others, made this a major holiday. We can thank them for the word "Yule" that still is used interchangeably with Christmas by many contemporary persons. We can also thank them for the traditions of caroling, the Yule log, and the first custom of bringing an entire evergreen into the house. It is fitting that this would be a major holiday for those who lived so far north that the winter nights literally swallowed the days in the time directly before Solstice.

Christmas: The earliest record of a Christmas celebration was in Rome in 336 C.E. Pope Liberus in 354 C.E. placed the holiday on December 25. The Armenian Church still celebrates on January 6th. The holiday remains an almost universal celebration around the world. Many people participate in the cultural elements of Christmas to a much greater extent than in the religious elements. Unfortunately Christmas has come to represent consumerism in our society with many stores and businesses dependent on large sales this time of year. Many Christians are trying to reestablish the religious aspects of the season by moving away from large scale elaborate gifting and returning to homemade and personal services gifting. Many see this as an environmental imperative as well as a religious one. There is also a movement toward joint celebrations with many other spiritual seasonal celebrations to allow us all to experience the diversity of spiritual experience as well as the Christian teachings of peace and good will toward all.

But even as Christmas seems to be everywhere it is important to remember that other solar festivals remain and new ones have been established.

Pagan Yule: The word Yule is from the Scandinavian word Jul meaning ‘wheel'. Many pagans honor the turning wheel at this time. Many Wiccans honor the theme from the Celts: they see Yule as the time of battle between the aging Holly King and the young Oak King. Others may use the Greek myth of Persephone and the Underworld to enact the theme of dark giving way to light. Still others see the waning God passing to the waxing Goddess.