The Trials of Parenting Athletes 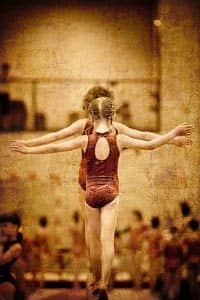 As a Christian (and an avid sports fan), I often found myself torn about the relationship between my faith and my son's athletic "career."  Two dilemmas were particularly difficult.

A little background will help.

In 1984, when the summer Olympics in Los Angeles were on television, we discovered a hidden talent in our 8-year-old son Tim. As he was watching the gymnastics competition, he jumped, leapt, and tumbled all over the room, off the furniture and onto the floor. This terrified his mother, but Tim reveled in this newly discovered ability to defy gravity, and his mother quickly realized that if he was going to flip and flop all over the house, he should receive some training so he could do it safely.

Within a few days he was enrolled in the local gymnastics club in Tracy, California. On the first day, when he was asked to stretch, he showed (to our surprise) that he could do the splits in all three directions. What began as three one-hour practices per week quickly escalated into lengthier practices on more days. The coaches spoke of Olympic potential right from the start. Tim advanced rapidly, and when he won the state championships in the all-around at the age of 10, his coaches in Tracy said that they had taken him as far as they could, and we should find coaches who could help him realize his "great potential."

Thus we began driving five days per week to a more advanced gym about 60 miles away. With his coach Greg Corsiglia, he began winning state and regional competitions, and won his first junior national title in the all-around at age 15. He competed internationally for the United States and went to Stanford University on a full-ride scholarship under head coach Sadao Hamada, who had coached Olympians and led Stanford to two NCAA championships. They won the title again in Tim's freshman year, and at the outset of 1996, coach Hamada confided in me that he expected Tim would make the Olympic team - just before Tim suffered a career-ending injury.

So much for background.

The first dilemma concerned time and priorities. Gymnastics, like many sports, requires tremendous amounts of time and persistence and dedication. Therein lay the first dilemma that I faced as a father of a world-class athlete. At the elite level of gymnastics, competitions were frequently held on Saturdays and Sundays together.

So how is a father, who has responsibility for the spiritual upbringing of a child, to reconcile taking his son or daughter away from worshiping the Lord in church for an athletic competition? I wrestled with this long and deeply. A child's relationship with God is far more important and infinitely more enduring than any athletic career could ever be; his relationship with God, I knew, would endure throughout eternity, long after his accomplishments in gymnastics had fallen into the far recesses of history.

And yet it was clear that God had given my son an immense talent for this sport, and clear that God intended Tim to use them. I often felt guilty when we skipped a Sunday worship meeting to go to a competition. I tried to compensate by having serious spiritual conversations as we drove two hours roundtrip to practices every day.

Ultimately, did we do the right thing?  I honestly don't know. All I know is that this was a very deep and difficult dilemma for me. So many sports today, even at beginner levels, stage competitions on Sundays. Parents often go overboard when they try to be friends to their children (giving them what they want) rather than being a parent (giving them what is best for them). What could be more important, more profoundly needed, than worshipping together as a family, and setting an example for the children of devotion and right priorities? Was I sending the wrong message, reinforcing the wrong priorities, by opting for competitions over worship?

Tim, by the grace of God, turned out to be a godly young man. God blessed the tightrope we walked, and answered my many agonized prayers, but I see many parents whose children will never be world-class athletes who are rarely in worship on Sundays because of their sports.

Where does a parent draw the line? For me, it would have been if I felt my son were losing his relationship with God. I never felt that his faith was flagging. If I did, I think I would have pulled him out of the sport immediately. As it is, God actually deepened Tim's faith through gymnastics and blessed him with a free undergraduate education at a fine school. Even Tim's career-ending injury led to a deepening of his relationship with God and awakened a desire to further explore the relationship between faith and suffering. Was this God's way of drawing Tim to his calling? Would it have happened if he had never been injured? God alone knows.