The Wrong and Right Kinds of Interreligious Dialogue 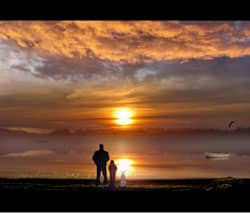 The wrong kind of dialogue among people of different faiths is the kind that works from the polite assumption that everyone has a little truth, rather like the blind mice exploring the elephant.  The parable goes like this: the first mouse feels the elephant's ear and proclaims, "It's like a giant leaf!"  The second feels the leg, and says, "No, it's more like a tree!"  The third feels the trunk and is certain that it's more like a huge snake.  The analogy to this parable suggests that interreligious dialogue is similarly a dialogue between different good people who have partial truths.

What's wrong with this parable?  It eviscerates religions themselves as being capable of real truth claims, positing that there is some vague transcendent truth "above" the religions themselves.  Of course the only intellectually defensible posture in such a parable is to distance oneself from religions altogether and head straight for the putative transcendence itself.  Why be a blind mouse when one can take out a digital camera and just take a snapshot of the elephant?

I will speak of the view from Catholic theology, though I suspect that my friends from other traditions might make arguments that accept the structural difficulties of the parable.

The right kind of dialogue among the religions is one in which participants in the dialogue operate from within a thick understanding and practice of their respective faith traditions.  For Catholics, that means a radical conviction that all reality is circumscribed by the creative action of God, that all human language and creativity is rooted in God's gratuitous love made manifest in Jesus, that our discernment of reality is our desire for God made possible by God's desire for us.

To flatten this view of reality in favor of finding some unthreatening middle ground for interreligious dialogue would not advance the dialogue, because the interlocutor could no longer speak truly as a believing Catholic.  Thankfully, we are past the days when the religious other was regarded as an enemy.  Today we can acknowledge the real difficulty of dialogue with at least the presuppositions that we can be friends, that we can disagree about truth claims and still do good work in the world, and that after the dialogue session has ended we can arise from the conference table and go share a meal.

Whither interreligious dialogue?  On the ground level, one answer is beginning to emerge: it is for the sake of developing friendships that lead to systemic commitment to address poverty, racism, war, and all the other afflictions that beset people.  In the postmodern age, moreover, there may be a second answer: the defense of religions themselves as benign forces in the world.  A significant minority of people in Britain, for example, are persuaded that religion does more harm than good.  In the face of such criticism, the different traditions may find that they have more in common than they once thought -- commitment to sacred texts, worship practices, education, and so on.  They may find that they need each other in order to suggest views of history different from those that would see all religions as sects that depart from that earlier mentioned transcendent orthodoxy.