This is Our America 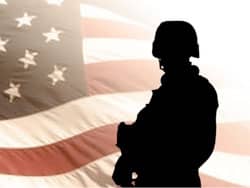 On the Saturday after the shootings (as I am writing this), the reports from Ft. Hood, Texas, are still coming in.  Details are yet sketchy, but the media is grasping at the obvious story lines for their ubiquitous 24-hour coverage.  As we have come to expect, the non-Christian identity of this "Muslim-American" has become headline news.

This story line is not without consequences.  The L.A. Times reports this morning that our Muslim friends in southern California are once again bracing for the backlash of media coverage.  The message during Friday prayers at the Islamic Center of southern California was one of caution and care, the Times reports.  The article goes on to quote Salam Al-Marayati, who is executive director of the Muslim Public Affairs Council in Los Angeles: he said his first prayers were for the victims; then he prayed that the shooter was not Muslim.  The Islamic Center's press release condemning the attack also thanks the city of Los Angeles for their increased presence and protection of their facilities during this time.

This is our America, a society we share, divided along deep faults of difference and disparity.  As a "Methodist-American," I do not fear for my safety after a fellow Methodist commits a heinous crime.  The denominational affiliation of such person most certainly may not be mentioned in news reports (unless he or she were an ordained elder or deacon).  And the churches of my tradition have no need to renounce the deeds of an outlier when one of our own goes astray.  As a Methodist-American, these are not my realities.  But for Muslim communities, this is their America.

This event reiterates again the importance of Claremont's new mission.  The need for inter-religious education is more important than ever.  We need leaders ­--  chaplains, counselors, educators, scholars, professionals in all fields -- who learn alongside those of other religious backgrounds.  This educational strategy -- of ending religious segregation -- not only benefits individual students, but it is also an active step toward a world in which responses to disasters need not be divisive, when religious communities need not fear for their safety, and where society can avoid crass simplifications that grow from our deepest suspicions and prejudices.  Claremont is choosing to help transform the world, even as the School is being changed by it.  As our communities continue to change, our education -- and Claremont -- must evolve with it.

This article is reprinted with permission from President Campbell's blog at Claremont School of Theology.

Jerry Campbell is the president of Claremont School of Theology in southern California.