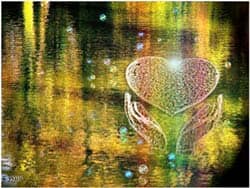 It is a funny religion.  And yet, Suzuki's comments could apply not only to the religions of the Bible, but really to the history of humankind.  We humans seem to be continually struggling to reconcile ourselves with God (or some Source of meaning), nature, other human beings, and our own heart.  It is tragic that Christianity, (as well as the other major religions) has been co-opted again and again to foster violence, alienation, prejudice, environmental destruction, and self-hatred.  And yet despite its violent history, the heart of Christianity, and in fact the heart of all major religions, is not conflict and separation, but rather compassion and reconciliation.

In 2008, Andy Dreitcer, Frank Rogers, and I formed Triptykos in order to re-claim Christianity as a spiritual path - a path that seeks to cultivate compassion rather than violence, personal vitality rather than self-hatred, and communion rather than alienation from the loving Source of all life.  In essence, we wanted to find a way to help people pursue the three great desires that stir within the soul of every human being: 1) the desire to be connected to a greater Source of compassion; 2) the desire to hold compassion for oneself and other persons; and 3) the desire to become a compassionate presence toward the suffering that exists within the world.  These three desires, these three pursuits, are what we believe is the "Triptykos," the three-fold compassion, that is at the heart of Jesus' life and teaching.

Read an article about Triptykos' work with healing and reconciliation efforts in Zimbabwe here.

Mark Yaconelli is the co-founder and co-director of Triptykos School of Compassion. The author of Downtime, Contemplative Youth Ministry, and Growing Souls, Mark lives in Oregon with his wife and three children.